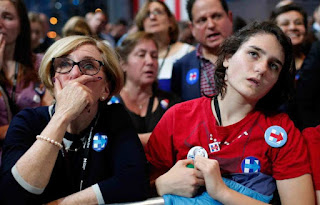 If there’s one thing the 2016 election made clear, it’s that many young Americans have an astonishing sense of entitlement. The popularity of Bernie Sanders, combined with the hysteria over Donald Trump winning the election, served to highlight just how bad the problem has become.

Of course, the signs were always there. College campuses across the country have become enclaves of political correctness. Instead of a place where students have their ideas challenged, higher education consists of safe spaces and trigger warnings. On college campuses, feelings have become more valuable than facts.

Many have rightfully pointed out this college environment leaves students ill-equipped for the real world. Away from the safe spaces, the real world doesn’t care much about your feelings. Sadly, the warnings have fallen on deaf ears. Instead, American colleges are churning out young people unprepared for actual careers.

I am (unfortunately) a millennial. But I can say this- I work. I'm married. I'm straight. I volunteer. I pay taxes. I vote. I don't riot. I don't loot. I don't cry if my candidate doesn't win. I will raise my children to respect others. I will be self sufficient and not grab government freebies. I am a millennial and we are not all liberal hysterics.

Honestly, as a small business owner, I wouldn't hire any snowflakes. Their stripes have been proven with this last election and I'd rather go without a full staff than hire them. College graduates now days think they're owed something without having to work for anything. They don't know the real accomplishment of completing tasks with integrity and putting in effort. Colleges like SU are only turning out renegades and social justice warriors who lack any sense of personal responsibility. You can't even call them adults with the way they behave. They can go community organize at some other company on their dime; not mine.

This is an excellent article and about time employers wised up. I wouldn't want someone like that Molly girl representing my company in any way. There's just too many other people who are proud Americans that want employment that employers don't have to sellout to the social justice garbage. Glad to see other owners doing the same.

Looks like 20-somethings just temper tantrumed their way out of the job pools. And for what? Hillary Clinton? She's hardly worth all their angst. Soros won't be around forever, kids.

Great to hear brother....great to read as well..what solutions might you have for these morons looting and blocking traffic?

My kids are all millennials but none of them are snowflakes. I think that when it comes to looking at what their majors are in college will tell you a lot about their mindset.

If I was a business owner and someone showed up with a Liberal Arts, Art History, Gay/Lesbian Studies, Woman's Studies, etc on their resume then I would immediately dispose of their resumes. Science, Math, or anything that requires critical thought - that is a different story. The same thing goes for former military or reservists, they go to the front of the line in my book.

Make them work for their handouts. SNAP for Service could be the title or something. These idiots make us all look bad but I'm willing to bet a solid 50% of my generation is conservative leaning. You just hear it because of the MSM. Look at the riots. 15-20 people smashing stuff. 200-300 camera people covering it.

Common Sense with your Coffee said...

Rebel, not everyone has a propensity towards math & science but they could have a way with people which would be very beneficial to any organization that deals with coalescing groups of people to achieve goals. Therefore their major isn't indicative of their ability to be a great team player. Reyes has the right idea that administering a test that has triggers can give you a better read of where that person fits on the snowflake spectrum. Personally wouldn't hire snowflakes in general. No need to deal with their drama.

Point well taken Common. I was a bit over-generalizing in my statement before. However, college majors, in my opinion, are a good start as a general rule of thumb. Granted there are exceptions to every rule. I suppose that is why I chose my major over a feel-good major. My basket weaving will beat anyone's snowball rolling any day of the week!

You are absolutely correct in not hiring snowflakes. Give them a dose of reality in a foreign country and they might come around but hey, what do I know. I got lucky with my kids.