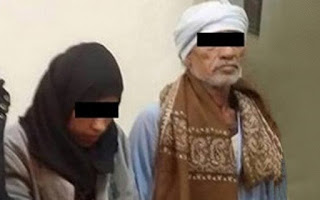 Emirates 24|7 reports that after 23-year-old Merfat had put her child down for the night, she retired to her bedroom in the house she shared with her 59-year-old father, Faraj, in Sohag, Egypt. However, she soon awoke to the cries of her little girl, coming from her father’s room.

Merfat opened the door to find her daughter, 2-year-old Grace Ahmed, being violently raped by Faraj, the child’s own grandfather.

Instead of attacking her daughter’s rapist and saving her child, Merfat ran some bath water in a small tub, undressed the girl, and placed her terrified, bleeding baby inside. At the hands of her own mother, little Grace was held underwater until she drown.

According to Merfat, she murdered her own daughter to “avoid scandal” in the overwhelmingly Muslim town.

This is a culture very foreign to us.

People like this need eradication from the face of the earth. Any questions?

And hillary wants to bring them into THIS country?
Did I mention how stupid and dangerous these liberals are?
YOU can be slaughtered in the local mall and they would blame YOU for making muslims kill people.
She killed her own daughter. And did nothing to her daughter's rapist
THAT religion is TOTALLY incompatible with our culture. Forcing it on a population you are actively trying to disarm makes me question exactly where your loyalties lie.
Keep cheering.

You will never convince me otherwise the so-called religion has issues... The crescent moon is the most common Islamic symbol. In fact, it is found on the top of every Muslim mosque around the world and on the flags of many Islamic nations. The crescent moon represents the god of Islam, Allah, who was the pagan moon deity of Mohammed's tribe, the Quraysh of Arabia. When Mohammed conquered Mecca in Saudi Arabia by force in 630 A.D. he destroyed all of the 360 pagan tribal deities in the Kaaba and set up his tribal deity, the moon god, Allah, as the chief deity of Arabia. Later, when he tried to convince the Jews and Christians of Arabia to worship Allah, they refused, knowing the true identity of Allah, and Mohammed then began his bloody conquest of the Arabian peninsula, slaughtering thousands by the sword

We want, oh we need that kind of justice here...NOT!

His 23 year old daughter that he slept with must have been getting too old so the old man went for the young stuff. These depraved, perverted, goat "herding" animals must be eradicated from America, but our government is bringing them in by the thousands. Are you democrats really that stupid that you can't see this?

And coming to neighborhoods near you!

Lets see how Obama would act if that pervert was allowed to stay with his wife and daughters.

It's just a Muslim baptism.

You can thank Obama for this and also Hillary she wants to bring in more of them. VOTE. TRUMP.