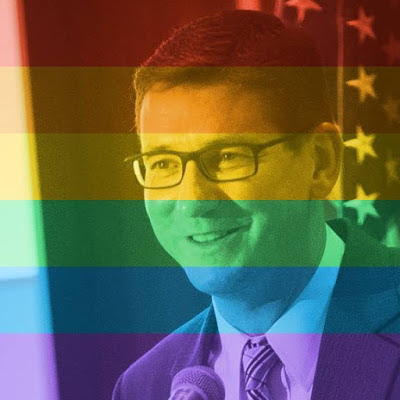 Jim Ireton Loses To A Guy Who Didn't Even Run A Campaign. Clearly the people of Maryland are showing through votes they are sick and tired of these LGBT candidates. Elected officials shoved so many new laws down our throats last session, gay marriage, rain tax and so many other laws the majority firmly disagree with, things like Ireton are nothing more than liberal freaks.

Joe Werner didn't answer your call last night Jimmy because I phone spoofed him under your phone number, acted like I was you and asked him out on a date. I told him I wanted to squeeze him with my eyes and he freaked out and hung up.

Maybe this blade will just drift off into the sunset and we will not be bothered by him anymore. Doubtful, but one can only hope.

problem is, now he will stay here hanging out in the city park - (making friends)

Soon he will get to use the women's bathroom legally.

I love it payback Jimmy for abandoning us voters that voted for you into the city council, AW.

OR waiting around at young men's 18th bday party's in rehoboth.

So I just won my 4th election with 207 votes in Salisbury and now I am going to run for congress. I am going to use all my emails that I illegally harvested from the City of Salisbury's website and I will use that for my run for Congress. I will beat the pants off Andy Harris. Oh boy I will love that one. Hehehe.

Jim Ireton won 6 thousand votes in Wicomico County alone. That is 6% of the population and a lot of votes from the Democrats. Proves we have a bunch of sicko's in this county.

8:10, Did you hear ANYTHING at all Joe Werner in Wicomico County? Did you see a single sign anywhere? The answer is NO. If you go back and read my Post I clearly stated that Joe Werner didn't even run a campaign and he beat Ireton.

Then look at Andy Harris' numbers vs Jim Ireton. Ireton thinks he is someone he is not. Ireton learned that when you cannot screw with the numbers/votes, you are a tiny gold fish in a massive ocean.

Yes, there are Liberals out there that will cast their vote for another Liberal because these are hateful people. They do NOT care what is best. They only care about transgender bathrooms, additional taxes, gay marriage and voting for a woman simply because she's a woman and not because she's the best person to represent and transform America.

People need to think hard, (and I believe they are) do we really want to continue down the path we've been on for the past 7 years. Jim Ireton's MASSIVE loss to Harris clearly shows, (in the very least) Marylanders will support Harris/Trump instead.

Take note there Jane Day when you decide to try and make a move up to Annapolis the people you screw here might come back to you as well!!

7:52 Been legal in Maryland for years.

Joe most local ego maniacs think they can win a state election. Totally differant animal. You actually have to work to win. Unless you run against the Rainbow Warrior Ireton. He is a legend in his own mind.

It was a great night! Besides the Donald Trump enormous victory, we were able to celebrate the beating of Ireton AND Nick Mosby, husband of that nasty putrid lying ghetto trash states attorney of Baltimore City. He ran for mayor and didn't even get 2 (YES TWO) percent of the vote. Thank you God for having the voters see what those 2 filthy lying ghetto hustlers are really all about.

Werner doesn't even have a website and his FB page only has 135 Likes. Ireton knew he had it wrapped on the Lower Shore and was counting on the more liberal areas to get him elected. The problem is the more liberal areas are more sick of the gay LBGT crowd and they have worn out their welcome big time. WORN IT OUT BIG TIME. They are a bunch of freaks living in a fantasy world and liberals are just as sick of them as everyone else. DO YOU UNDERSTAND THAT IRETON! Even liberals don't like the thought of a man going into a rest room that their teen age daughter may be in! DO YOU UNDERSTAND THAT IRETON! Now take your agenda and shove it deeply into an area where the sun doesn't shine!

Now off to Delaware you go Ireton..off with you I say!!!! Git Git Git!

I agree 8:10. Also look how many voted for lying crooked Clinton. Wicomico is overflowing with nasty dishonest degenerates. I never knew the lower shore was filled with such filthy piss poor excuses for human beings.

The fact that over 2,200 Wicomico County democrats voted against ireton and for a guy who was non existent speaks volumes doesn't it? Maybe they are the dems who actually vote Republican in the general? Or maybe people are sick of the drama.

Some of you may not realize this, but Ireton didn't run to win against Harris any more than he ran for city council because he gave two craps about Salisbury.

He ran to win name recognition. It's all part of the game, the ongoing plan to keep running until he advances to his state level dreams. Using other people's money. Plan B is no doubt to get a cushy high profile job within the party or the star/federal administration.

You see, it's all about Jim. No doubt, he celebrated that night, all those heady thousands of votes.

I agree with 10:21pm Jimbueau ran for name recognition. And the loss actually saves him from months of chicken dinners and a humiliating loss to Harris which would have happened. Long term it may be best but for the voters we will get another dose of him. He will lick his wounds or something...haha... and be running for something else some day soon.