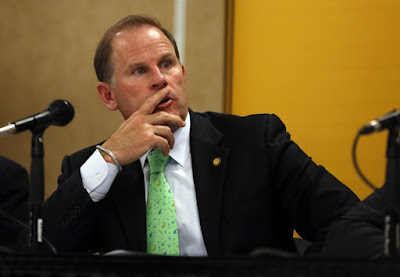 U. Missouri president, chancellor resign over handling of racial incidents

After weeks of escalating student protests and the threat of a football team boycott, the president of the University of Missouri system resigned Monday, forced out amid complaints that he had done too little to address racism and other ugly incidents on campus.

Chancellor R. Bowen Loftin — who oversees the university’s main campus in Columbia, Mo. — also will step down, the university system’s governing body, the Board of Curators, announced Monday evening. Loftin plans to leave his position at the end of the year and move to a new role within the university as director for research facility development.

The unseating of two of the university’s top leaders was a swift victory for student activists, who had been railing against what they see as a divisive racial climate on the midwestern campus. They have accused Missouri’s president, Tim Wolfe, of not addressing racist and bigoted incidents this academic year, including when the undergraduate student body president was called the n-word, when a white student climbed onto a stage and shouted slurs as a black group rehearsed a skit, and more recently when a swastika was drawn on a wall with human feces. 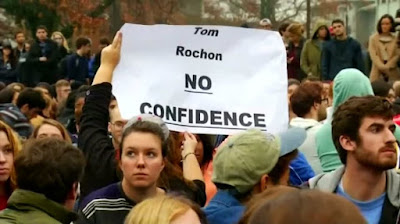 After months of protests and no-confidence votes by students and faculty this fall, Ithaca College’s president announced Thursday that he would step down in July 2017.

Student protesters, angered by what they felt was an insufficient response to racist incidents on campus, have been calling for Tom Rochon’s resignation with “die-ins” and other events, mirroring demonstrations over race and bias incidents on many campuses across the country in recent months. From Yale to Claremont McKenna to Princeton to Towson, students marched, occupied administration offices, and presented lists of demands.

At the University of Missouri, the system president and the university chancellor resigned after protests all but paralyzed the public university’s campus, and students at many universities began or amplified their efforts to make changes. The day after that resignation, Rochon, Ithaca’s president, announced he was creating a chief diversity officer position, but hundreds of students gathered, shouting “no confidence!”

So WHY won't SU students protest against SU president Eshbach and SU Police chief because the millennials are chickens.

good post Joe keep on em there has to be heads rolling and it starts with the SU PRESIDENT.

And this is why the SU President should NOT resign. The DA decided to NOT prosecute, but the University said "this is not over", and will conduct their own investigation. It won't be a criminal investigation, but rather a code-of-conduct investigation. That is the right way to proceed.

Now, we'll see how things end up, but for the time being, SU is doing the right thing. Also, they cannot release much information due to Federal Law (FERPA). Life would be so much easier if the University could just dump a truck of info out there, but they would be in violation of federal law.

So, I would assess that the University so far has handled this well. Let's see if it continues.

Sorry but in this case the president of SU should shoulder the entire blame. The relatively new dean is not at fault here.

12:13, Because those liberal pansies, (I'm being kind) are so scared of their own shadows, they're useless. They've been brainwashed by liberal teachers who tell them it's OK to be gay and support everything they tell them to so we'll live in a better world.

Now when you go to tougher areas, THEY GET IT. They've had a tough life/upbringing, they're paying their own way at school, or at least a good portion of it and they stand up for their rights.

No, they didn't jump the gun and LIE in ALL of the cases where they claimed it was race issues, when in fact it was NOT. Holder was flying across the country on behalf of the President and it was all BS!

Yep, Salisbury University students don't have and never will have the BALLS to stand up for what is right.

Here's food for thought. Don't you ever wonder why black students aren't up in arms over the Idiot/s who did this? Yet we had all those white liberals standing beside the blacks when Obama fed us lines of bull crap and didn't even allow time for a proper investigation.

100% correct that's why the pressure has to be kept on them,who is Dr Eshbachs bosses lets start with them ?.

SU police chief is doing what he is told by Dr eshbach,trust me I have people close to them.

If nobody was charged, no crime was committed. Why fire the Dean over something that's not a crime!?

The DUD needs to be fired. The name DUDley doesn't sound nice anyway and how prolific that it was born into it. As soon as it was found out who did this it should have issued a much stronger statement but like all DUDS it is useless and worthless.

12:36 I doubt it. Too well written for one of the special snowflake students to produce.

Eshbach and Lashley should both be gone from the University. If this is the best the University system can do, Lord help the students who remain there. Once again, if it was white students who did such as this, there would have been immediate action and they would no longer be in school or Salisbury either probably.


I have nothing to do with the campus, nor did I read the post. I passed on the comments also, because it is a waste of time.

I have a different take on this crap. Everyone puts the blame on anyone with shoulders, except the guilty party that tried to start some ...
As for as the student body, they are always treated like the entitlement victims, when they are full blown adults. They want to be treated as adults when purchasing booze, etc., but when caught with their hand in the cookie jar they want to be referred to as kids.

Can't have it both ways. Get the heck in class, study and go home.

It is a crime ,LIBERAL.

the SU president cant leave her 500,ooo a year job, she spends that much a year on food

I will be talking about this issue at the local area vfw.

Blood thirsty group! Are you all so willing to have someone fired from their position because your widdle feelings are hurt and you want to make a point? Are you trying to imply you have been "triggered" by the actions of a couple of 20 year olds? How does that make you all any different than the college students who want their safe spaces?

Awww
another idiot liberal sticking up for 2 racists and a SU PRESIDENT I bet she put you up to it ?

These students are guilty of a race based crime, and if the DA had balls, or at least good sense, he would charge them both with the crime and obstruction for not talking.


You talkin' to meeee

Another example of black privilege.


The SU students conspired to create a problem. They should be punished in a way that withstands scrutiny.

Missouri officials knuckled under to punks. They are now gone, along with what may well be golden parachutes. Recent news is that Mizzou has taken a major hit in applications and enrollment leading to closing 4 dorms due to no occupants.

Ohio State recently told troublemakers to scram or be arrested; they left.

Let's hope SU gets to the bottom of this and punishes severely. The intent was to stir up trouble which might have escalated to possible human injuries and property damage. Suspension or expulsion, loss of aid, etc. all sound worth considering. Treat it like an arson attempt.

i do not see how students,there at the whim of the school's administrators,should have the right to write laws pertaining to the university that is up to the administrators of the organization let's quit giving in the these student demonstrators and suspend them and get them off the college campus where they are causing the unrest all of the money in the world from tuition fees is not worth the unruly mobs that gather on campus