Sussex County Delaware Demanded Identification Before Being Allowed To Vote 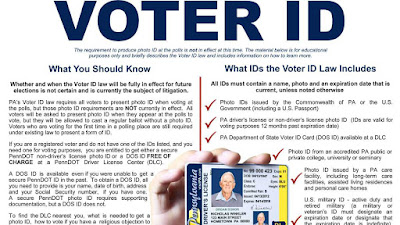 Yesterday, a Sussex County Official demanded people show their drivers license or photo ID before they could vote. This is not a law in Delaware. They weren't too happy when they were challenged on the subject but people felt their vote was far more important so they went along.

Yes, in Wicomico and I was happy to oblige. Everyone should show ID to avoid fraud.

When I early voted I was not asked for any ID, but I did know the Chief Judge if that makes any difference.

I early voted at the Civic Center and I showed the lady my i.d. and she told me that she didnt need to see it

Why should anyone commit fraud when the delegate votes so greatly outweigh ours? Ooooh,someone was really getting over on the system by not showing their ID when they voted.The GOP is in damage control,and right they should be.Trump has brought glaring election problems to light.I long for a popular vote only Presidential election.

Yes I did as was very happy to show it!!! I voted in Delmar,DE

Yes, in Florida we were asked.

I was not asked but gave them mine. The poll worker took it and had everything he needed. Two years ago when I voted, I tried to hand mine registration card and ID to the poll worker (different one) and they refused to take it. I told them they should take it and use it, they then informed me that they weren't allowed. It then took three people 15 minutes to find me in the system. These cards are sent out for a reason and should be mandatory along with an ID to vote! Tom Goslee

I wasn't asked in Wicomico county at the church close to Boonies.
However the same old people at the tables who are all democrats .
Their last names are Church they live in Quantico rt347 and are union people. All African Americans.

What I heard was some people were asked to show ID who gave different addresses then were on file w/the elections info. This is perfectly allowed. If an official is suspect of someone they can ask. It's like that everywhere.

I agree with 8:41 we should have to show ID to vote, no problem.

I have always showed my ID at the poll so the election judge would properly match my name to the name on the election roll.

At Wi-Hi, I tried to show mine, she turned her head and refused to look at it. Then she couldn't spell my name correctly and was forced to look, whether she wanted to or not.

Good. Illegals with no id can't vote against the wall.

I voted in Delmar Delaware and was asked for ID even though I gave my name and address. ..I thought ID was not required. I happily gave my ID but wondered how many others were asked. It should be all or none.

Guess some of these poll workers think they can make up their own rules.

ID should be required., it's too simple for legitimate citizens to get.
What I didn't care for about MD voting was shoving my 'paper ballot' into some monster machine and not getting a chance to see what the machine tallied for me. I should have taken a pic of it [the ballot] like some did.

Every polling station should ask for a photo ID. I wonder how many deceased people voted in the Primary. Also illegals using false names that they know is on the list but the people with that name do not vote made known to them by our honest government.

Voted at Wicomico High School (a last minute change from the Civic Center because of a dog show). As always, with Voter I.D. card in hand, I attempted to hand it to the poll worker. As always, she stated she didn't need it. As always, I stated voters should have to show their I.D. As always, she agreed but said it's only required we "say" our name and address. This is just so wrong!

As someone else on here stated, I questionably watched the machine eat my ballot away with no verification of my votes or that I'd even voted.

But most importantly, Donald Trump won the election! And Andy Harris.

In Sharptown, we say our Name, Address, and date of birth. But I always take my ID with me, just in case.

I voted in Delmar, DE and was asked for mine. I didn't mind a bit and feel everyone should have to show one.