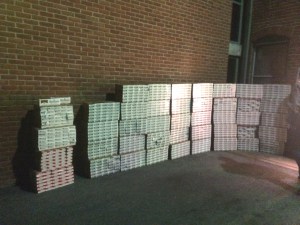 On Monday, a Berlin Police officer conducted a traffic stop on Route 113 near Burley Street. According to police reports, the driver appeared to be extremely nervous and presented suspicious behavior to the officer during the initial contact.

The officer noticed a bed of the vehicle contained a large amount of cigarettes and a K-9 team for the Worcester County Sheriff’s Office was called to assist with the investigation. The Maryland Comptroller’s Office was also contacted to conduct a joint investigation with the Berlin Police Department.

The joint investigation revealed 1,292 cartons of unstamped, untaxed cigarettes, which translated into 12,920 packs of smokes. The value of the cigarettes was determined to be $83,334, representing a tax loss of $25,840 to the state of Maryland.

Toyota Tundra? thats the work of ISIS. what do they do with all those cigarettes?

wow how about focus on Thugs ,rapists,outstanding warrants .

Since they were never intended to be sold in Maryland, just how did Maryland "lose" this money? Why are we paying to prevent New York from losing tax money?

If these cigarettes were not going to be sold in Maryland then there is no tax loss whatsoever.

Wonder how many kilos of heroin and cocaine made it through while this "tremendous" seizure was going on?? Where's Mike Lewis doesn't he want to take partial credit for Worcester county, a joint task force effort

2:18....you're the guy who looks at every story for the negative angle, right?

When you penalize the cigarette industry, and not other industries in TAXES, this is what you get. People find a way around the system.
You caught this one, but not all the other ones.
The government created this problem.

How come they never go after the supplier that sold this large amount of cigarettes to this group? I mean come on, I guy goes into Sam's Club and buys a thousand cartons but it don't raise any alarms?

Maybe the truck with the smokes was a decoy

Its not a great job when you miss inform the public on what happened and stretch the truth to make a more sensational press release. Maryland lost nothing as those were just passing through the state.

awww a cop is mad ,look at me look at me.

It's getting hard to make a dishonest living!!

Nervous? Suspicious? Most folks are nervous during a traffic stop. And all folks are suspicious to police! K-9? They smell tobacco now? Nothing else alerted by the dog. Why did they search? This is crap!

This is hurting law abiding businesses. These smuggling operations are well organized and are stealing taxes from the American people. Don't you wonder why most convenience stores are now owned and run by foreigners?

What happens to the cigarettes now that they're confiscated?

What happens to these cigarettes that are confiscated. Do they go into Maryland inventory and get sold???

every state they pass thru puts a tax on them

Ok folks here is some info that may help.....the cigs get purchased in VA by the carton. This goes on for a few days sometimes a week or so. There is usually a small group of folks involved. Sometimes va will even tip off md. The money isn't in the packs...ny city is full of machines that sell cigs one at a time for 2-3$ a piece. For these folks the risk is worth it. I may be mistaken but the cigs get incinerated. Actually besides some media the state gets nothing in the end. In all honesty it's a total joke.

You are correct, the cigs are destroyed.

Question: Is there any other item that is illegal to purchase from one state (for a lower price)for use in another state?
Is it illegal to shop in Delaware to "beat" the MD tax?
How is this any different that, say, buying an expensive boat in DE and using it in MD? I'm pretty sure that the tax loss on that boat (to MD) would be considerably more that a 1000 cartons of smokes.

It is not legal to buy a carton of cigarettes in DE and bring them back to MD. Police don't bother people with a carton or two. Alcohol is the same.

AS far as boats go, thousands of real expensive boats are registered in Wilmington, Del. instead of other states. Just drive down by a Yacht club and see.

So, basically, price shopping is illegal?

I worked in the tobacco industry for over 30 years. The cigarettes are usually sold back to the manufacturers. That's where the state of MD makes money. These smugglers are usually foreigners from Pakistan or India. They set up a "cigarette outlet" in VA and then have their accomplices transport them to NYC. Most manufacturers avoid them because they know what they are up to. This means that they receive no price support or merchandising dollars from them. These stores can legally purchase cigarettes from the wholesaler with the proper licenses, etc. That's the problem. It's more profitable to these knuckleheads than drugs and the penalties are minimal.

Don't pay attention to May 1st 10:44 AM, they know not what they write of. Maybe he / she sold cigs to businesses and has some knowledge but not for what is out of their realm - the law.
Educate yourself people.
Look up the laws and learn.

But first, seized cigarettes are destroyed because there is no guarantee the cigarettes have not been tampered with. Someone could use a syringe to inject poison into a pack(s). State of Maryland does not sell them. It is a safety issue. Plus, there is a date of manufacturer of cigs that come into play. The money the State would get would be (if collected) is from the fines (read law below).

Legally, one can only be in possession of (2) two PACKS. I don't feel like looking up "comar" Code of Maryland Regulations to show you.