Primed to fight the government

A fast-growing U.S. movement armed with guns and the Constitution sees a dire threat to liberty 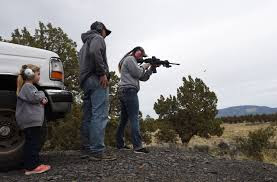 REDMOND, Ore. — B.J. Soper took aim with his AR-15 semiautomatic rifle and fired a dozen shots at a human silhouette target. Soper’s wife and their 16-year-old daughter practiced drawing pistols. Then Soper helped his 4-year-old daughter, in pink sneakers and a ponytail, work on her marksmanship with a .22-caliber rifle.

Deep in the heart of a vast U.S. military training ground, surrounded by spent shotgun shells and juniper trees blasted to shreds, the Central Oregon Constitutional Guard was conducting its weekly firearms training.

“The intent is to be able to work together and defend ourselves if we need to,” said Soper, 40, a building contractor who is an emerging leader in a growing national movement rooted in distrust of the federal government, one that increasingly finds itself in armed conflicts with authorities.

Those in the movement call themselves patriots, demanding that the federal government adhere to the Constitution and stop what they see as systematic abuse of land rights, gun rights, freedom of speech and other liberties.

People better wake up or become a slave.

11:06 you are the Freak lol. Go back in your middle class hole. Some people know what the deal is. There are many reasons in America to be alarmed these days. I would never take arms against my Country unless they step on our freedom.

Yes and these nuts have no clue.

You could take part in the Democratic process rather than trying to form a militia. We all saw how well Oregon militias work back with the great forest standoff...

11:06; 11:27; 11:53 spinless followers. They cant help it. They think of all the nice crap they would lose. They fear death so they will back down. They worry about themselves more than the future. I suspect you will stay out of the way but be careful folks. These are the rats that will call the cops on you because you own a gun.

12:59 Absolutely correct, we are lacking and totally without spin.

This is what ever family should engage in during family time. you never know when and who will attempt to harm you and your family. If it comes to the government taking my weapon(s) then no one including government agencies should be prohibited from owning a weapon. This is called equal rights for all or will it be discrimination by the government which will be lawsuits galore.

I was taught around 7 years old. Colt sport AR. My dad was real strict on gun use and how serious the weapons were. To this day I still shoot for fun. Shame drug dealers and criminals my take gun ownership from us.

Like the saying goes due to high cost of ammo I will NOT be firing a warning shot, survivors WILL be shot again!!!!

Like the saying goes due to high cost of ammo I will NOT be firing a warning shot, survivors WILL be shot again!!!!

don't expect this from the shore. as long as they have their beer, crabs, 4x4's, snuff and video games they are happy

Never under estimate the silent majority.

11:21 The government has not just been stepping on your and my freedoms. Since Obama became President the Obama administration has been stomping all over our freedoms everyday. So you need to wake up and get your head out of the sand.

You all with the stupid threats of how your ready to kill are so full of hot air. Who are you killing? Nobody!! And you shouldn't even comment about it... I have never bought a gun to kill anyone. I do work out 6 days a week it's more likely a crazy person will try to kick you butt over a parking spot then a home invasion. Love more fight less.

So you work out. At twenty five feet away from your attacker you are going to have a hard time fighting off bullets Mr. Superman. All the muscle in the world won't save you. You will still bleed red when bullets start flying.