Obamas pick DC neighborhood to move to in 2017 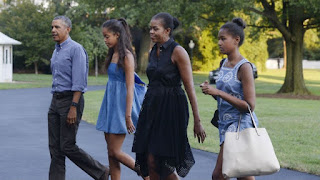 The Obamas are planning to rent a home in the Kalorama neighborhood of Washington, D.C., after the president's term is up, The National Journal reported Tuesday.

The family is staying in Washington so President Obama's youngest daughter, Sasha, can finish high school in the area.

The White House has not said which house the president and his family plan to move to, but their new home will be in walking distance of the ambassadorial residences of Britain, the European Union, France, Iceland and Portugal.


Sorry they are staying in the area. Be better if they fled outside of America. Just keep out of the media please, I would like to watch some TV without having to mute.

Oh, he doesn't want to move back to his safe neighborhood in Chicago.
Probably staying in DC because Clinton said she will make him a Supreme Court Justice.

There goes the neighborhood.

Why not downtown Chicago......or better yet Baltimore????? They could first hand see how well "Black Lives Matter" group have turned those neighborhoods around!

He belongs in a prison for the rest of his life.

Staying in DC because he is the next Supreme Court justice judge.


That fellow wouldn't make a pimple on a Supreme Court Justice back side.

If he needs something to do, maybe make him a cellmate of the Clinton subject.

And they will still have police protection.

Someone needs to give out Section 8 vouchers for his neighborhood. Im sure thats not HUD housing development? He needs to spread that wealth and get some poor ghetto thug neighbors.

Rent? After being a president, he still has to rent? Lmao. Figures. Their mentality.... Surprised its not section 8!

Nice neighborhood, best of luck to the President and his family.

he gots to rent so he got enuff $ for keno

5:23 why do you call him the president and wish him luck? This just goes to show how low you and many others have sunk to wish such a liar good luck. If you had one moral bone in your body one ounce of decency you would be ashamed of yourself. obama besides being a pathological liar is vulgar crude and perverted. And to whoever raised you filth absolute filth. Parents like yours with no class should be forced to be spay and neutered.

I agree with 7:47. Most of the commenters here need professional help to understand that this man was elected President of the United States by a MAJORITY of American citizens. TWICE.

443 if Clinton wins you can guarantee he will be appointed. 100 percent.

8:10 You are a fool. MAJORITY! Voter fraud, IRS blocking conservative groups from collecting donations to organize against this a$$, and not letting the truth out about Benghazi are just three things the allowed this jackass to get a second term. Wise up!

Please leave a comment explaining what you will do when there is no money left to keep you on the public retirement plan?

No 10:22. You are the fool if you think somehow the IRS lost you an election. Easy to cry voter fraud when you don't like the result. Unlike Bush who had to get the Supreme Court to hand him his first election. And how many hearings did we have for the 37 Embassy attacks under Bush? Give me a break. And no, I am not on the public retirement plan. I have worked my whole life, saved my money, have no debt and in 10 years or so will retire with a very comfortable 7 figure nest egg. Who's the fool?

I don't care about the last 2 elections. This one will be not without unrest and death. Time to make the change. Wake up and go to work fools.

Oh OK 5:15. Hope your retirement plan works out. Hope you are heavily diversified. But if you continue to support the democrats as you sound like you do then you are the fool. Also, it may be time to stop focusing so much on Bush. We have moved on!!

Just turn the channel like I do when Trump comes on.

Of course, and he should, just like all the other ex-Presidents.

Because he is still the President, whether you like it or not. People have disrespected him from Day 1 and I will say this until I can't say it anymore...it's people like you who can't stand for a Black man to be in charge. White men have been President forever, and it's ok, but let one black person be President and the world is in an uproar. The Republican administration has blocked all that he has tried to do for this country just to give him a bad name. He has tried to clean up what the previous President has messed up but people don't want to remember that. I also wish President Obama God's Blessings, as well as, God's mercy and grace because people like you are filled with so much misinformation and so much hate. And no, he is not the worse President because there were a few before him, but he is the most disrespected President that I have seen in my time. I pray for you and people like you who are so hard hearted and filled with hate, because you have no clue to what's going on. Peace. ..

hey 501, remember when pres Osama sat in his "church" in Chicago while his buddy and "pastor" jeremiah was screaming "GOD DAMN AMERICA"

It's temporary housing. They'll be moving on.

Seriously doubt this will come to fruition. Obama will be damn lucky if he isn't indicted himself after his presidency is over.

For what for God's sake

Yeah they gotta keep their girls in an elite private school that is exempt from their fathers mandate on public schools to allow all sexes to use whatever bathroom they want.Funny how the high ups are always exempt from the very rules they impose on us.

Looks like others don't understand or at least one. I am getting what you say, only I'm thinking more than indictment.

He wants to agitate after he leaves.

Now do you ALL know why the eastern shore is a joke??? The idiots who talk good about a president who has destroyed the United States in 7 years. How inept can you be to look around and see nothing but failure. SMH!!!

I heard about that & the "pastor" was wrong. I didn't support it then, will never support a "pastor " like that.

He is renting because he will not be in DC after his daughter graduates. The house will be big enough for mother in law suite and secret service.

If I were him I would move to Hawaii after graduation.

What did Bush do that was so great? Did they finally find all those "weapons of mass destruction?"