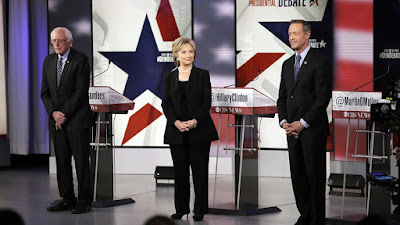 Well, Democrats believe in welfare and equal outcomes, so this makes perfect sense (in a weird, liberal-logic kind of way).

According to this, Martin O’Malley (you know – that glorified potted plant that stands next to Hillary and Bernie at the #DemDebates) had to apply for what amounts to federal assistance to keep his presidential campaign afloat. Because what the Democrat Party needs is one more boring white guy running for president –

This was O’Malley’s first regular request for matching funds. He received an initial $100,000 in January after being declared eligible for federal money in November. He was the first candidate to apply for funds and be declared eligible. To be eligible one must raise $5,000 in twenty separate states.

The FEC sent a request on Jan. 20 for the Treasury to transfer funds to O’Malley’s campaign. The taxpayer money matches contributions of $250 and below from individuals dollar for dollar.

everyone knows he wants to feel needed and admired since he screwed up Baltimore and Maryland so bad so all he is really doing is angling for a Cabinet job. He is not "attacking" on "Donald Trumping" anyone so he's expecting recipicle treatment. Help us all if he gets involved in the federal system

So we pay these jokers to run for President. Unbelievable!

why is this surprising or, in fact why is it news?

What a loser!! I am almost embarrassed for the idiot! Almost! I choose to laugh at his pathetic attempt. Too bad you cannot win so you can screw the country up O'Sadley. But do not fear, Obama is doing a fine job.

He will probably steal half the money. Maybe he and Hillary can share a cell.

It's another form of "unemployment" benefits, that only the special political rich can collect.