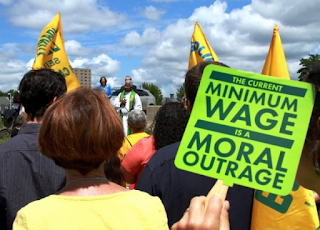 A proposal to increase the state’s minimum wage is headed to the Senate floor.

Senate Bill 39 increases Delaware’s minimum wage from $8.25 to $10.25 per hour by 1919 a figure similar to the one proposed by the Obama administration for a national minimum wage.

An amendment to the bill would go a step further.

Removed was a cost of living adjustment that in the current economy would bring only small gains in the base wage . However, some economists are predicting a higher rate of inflation at some point that would drive up the COLA formula.

So are they going to make that pay retroactive to 97 years ago.... nice!

LOL, It was their title, not ours. I'll correct it.

Want to see the death of an economy?

2:35PM, No doubt. This is an economy crusher (as if we need any more of those running around.) Plus, the work force that double dips by working for low wages and accepts social service bennies are going to be as angry as the folks in Washington State. Those welfare collecting workers actually asked for their hours to be cut back so they could continue collecting their bennies.

The problem with government stepping in like this is, they create a vacuum. The $10 minimum wage is still not enough to be self-supporting yet, the welfare ends, creating a huge gap. Meaning these people have to take second and third jobs in order to make ends meet. With the minimum wage at status quo, they don't make enough to be kicked off the welfare dole.

So, government, under the guise of trying to help lower income families, ends up doing more harm than good.

This is the government people have carelessly voted in without thought; therefore, all I have to say is Welcome to Earth.

Great way to kill jobs for young people and put them on the government dole!!!

Holloway Transit is only paying $10.00 an hour and you have to have a CDL. Plus you have all the added expense coming out of your pocket.