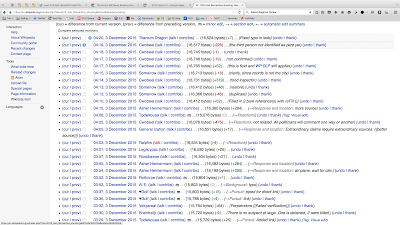 I don't know who else to send this to. I've heard of this happening before. But, I have never seen it with my own eyes.

There is of course, already a Wikipedia page on the shooting in CA today. That was quick! I had heard that there was a facebook page up about the French shootings that was created the day before the french shootings. So, I looked at the Wikipedia edit history. There are a bunch of edits already and as I write this, it is 2330 ET 2 December on the east coast.

The Edits I first saw in the edit history are dated 0400 and later on the 3rd of December. I'm attaching a screen shot, whose name is a time stamp of when I did the screen shot.

Now, it is possible these edits are coming from someone east of the international date line. But, I doubt it. I've seen too much manipulation in the mass media to give them the benefit of the doubt.

Very Interesting. Thought you'd like to see this for yourself. https://en.wikipedia.org/wiki/2015_San_Bernardino_shooting


This page was last modified on 3 December 2015, at 04:23.
Text is available under the Creative Commons Attribution-ShareAlike License; additional terms may apply. By using this site, you agree to the Terms of Use and Privacy Policy. Wikipedia® is a registered trademark of the Wikimedia Foundation, Inc., a non-profit organization.
at 12/03/2015 08:10:00 AM

It can also be attributed to the location of the server. Not every computer is located in the US. Wiki utilizes servers all over the world in part to avoid being subject to the NSA.

so what are we supposed to be looking at?

from wiki. So, those edits should have been time stamped in ET.

I would find it difficult to believe that the time on the Wikipedia servers are wrong.

You do realize that anybody can create a page on wiki and anyone can update it? There are people who will create pages immediately because they have nothing else to do. Doesn't matter if they have all the facts or not they want to be the first ones to create it. But I doubt you knew that because you believe everything is a conspiracy.

D'oh, 1155. I did know that, which is why I looked at the edit history and then took a screen grab of it when the servers, which are in the same time zone were already showing edits 5+ hours after the current time.