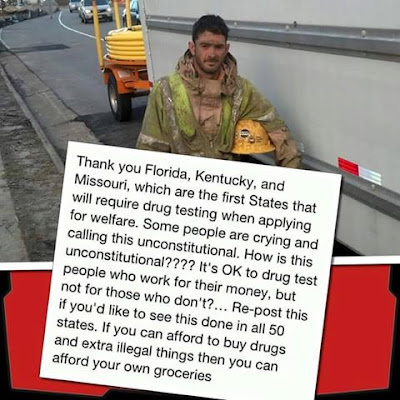 YES, YES, YES, should be a requirement in every state.

Maybe our new Governor will implement this. I have to take random drug testing so they can get their food stamps, subsidized housing and all the other free benefits they get........

While this sounds like a great idea, has anyone actually look into what happened in EVERY state that implemented this policy? The cost of the testing vastly outweighed (by orders of magnitude) the number of persons who tested positive for drugs. And what would you do if they test positive - strip benefits? What happens to the children of drug-using recipients if their parents' benefits are removed due to drug use?

I have always believed that person's on welfare or any government program be required to drug test for contiuation of their benefits. Many people on welfare have the attitude of entitlement and take whatever than can from the government. They have NO intentions of trying to get off welfare. Most are lazy and parasites that feed off of everyone else. I think their also should be a limitation on the amount of years you can receive welfare. Most on welfare are career recipients.

8:38 Dear bleeding heart liberal, answer to what happens: GET OFF THE DOPE AND GET A JOB/LIFE.

Totally agree with 9am. In addition, we should not have to pay for people who have babies WHILE on the dole !!!

We can either cull the MILLIONS of people who are sucking the system dry (drug test randomly and WITHOUT NOTICE --- something a previous poster failed to recognize) or we ALL go under.
Welfare should be SO uncomfortable and SO miserable that no one would want it except in an emergency (which is how it USED to be).
It should NOT be a lifetime (or generational) of free housing, free food, free medical care, free electricity, free child care, and THEN, an EARNED (???????) Income Tax REFUND (!!????) of $3000. And ALL welfare recipients should be REQUIRED to get the Norplant contraceptive.
As it is now, there is no shame or discomfort in being on welfare. In fact, MANY brag about not working and ridicule those who do, but there is NEVER any ridicule for being unable to support yourself for forty years.
A safety net is perfectly fine by me, but not one that nets 50 million people for three generations.

Here is the solution....if you are currently on welfare.....you can't vote. It's a conflict of interest. Reality check for you liberal morons. Bring it on.