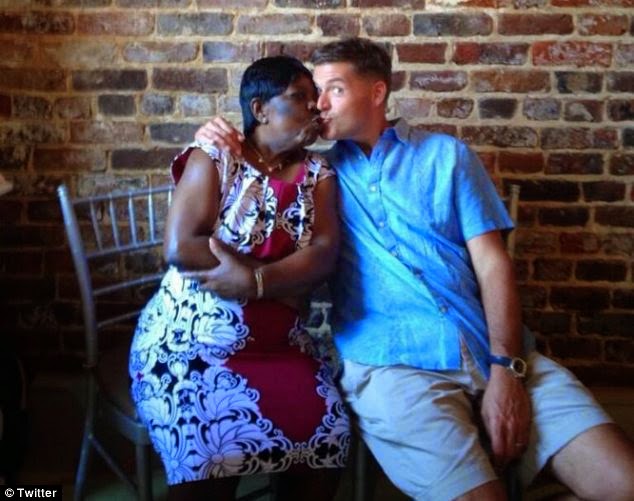 Just as Paula Deen is attempting to rebuild her sullied reputation in the wake of last year’s N-word scandal, son Jamie has re-ignited the accusations of racism that surround the family.

Amid reports that the Food Network has cancelled his own cooking show, Jamie posted a photo on Twitter on Friday of him smooching with an older African-American woman.

That is the real Michelle Obama YO

Okay, I read the whole thing.

Apparently, it's racist to cuss 'em and racist to kiss 'em. While the author claims that this employee was forced to dress up as Aunt Jemima for advertising photos and then did, against her will, mind you, the story also 'fesses up that this employee has never made that complaint to anyone, nor does the author provide any such photos to prove it ever happened in the first place.

Hey, I'm 60, and O remember ALL the Aunt Jemima commercials on TV, and I know the outfit burned in my brain, and these photo's ain't it!

Is there ANYTHING a Honkey can do with a Black person that's NOT racist? I mean, ask one about the use of verbs and adjectives in a sentence? Yup! Racist! Math? Yup. Show friendliness and fun towards one? I guess now it is.

It's too bad people have to keep stirring the racist pot. I have solid to die for friends of all colors and work beside them every day. I know I'd jump in harm's way for then just as I know they would for me. We don't see color when we look at each other, only a brother, or "cuzzin"!

I guess I'm just luckier than others, but one thing I do know, there's more of people like me and my friends than there are the pot stirrers.

Yes, things have gotten out of hand in this country. I remember about 60 years ago or so, Aunt Jemima was at the Colonial Store making pancakes for everyone. She was dressed in her typical dress and was a delight to all of us children and adults alike. No harm was done back then. Too bad that this racial card that is played now has gone way too far.

I don't get it. Maybe one of the painfully race-conscious liberals can explain why this is so offensive and racist.