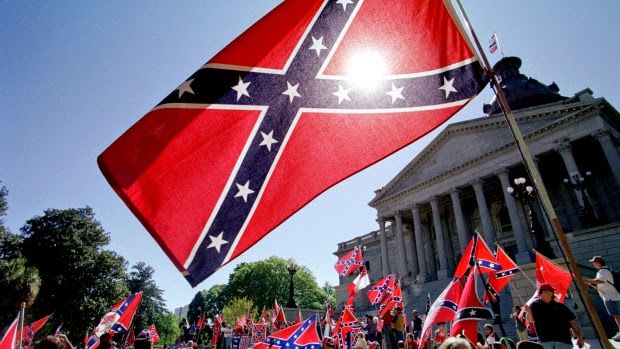 SACRAMENTO, Calif. (AP) — California state government departments will be prohibited from selling or displaying items with an image of the Confederate flag under a bill that passed the Assembly on Monday.

AB2444 by Assemblyman Isadore Hall, D-Compton, is headed to the Senate after passing on a 72-1 vote. Hall introduced the bill after his mother saw replica Confederate money being sold at the state Capitol gift shop.

California - land of fruits and nuts.

Without that flag how will be able to spot white trash rednecks ?

If you read his Facebook page he is from Monroe, La.Probably a good thing for him that he moved to California.

It is easy they are the ones that aren't mexican or flying a rainbow flag. LOL.

Anonymous said...
Without that flag how will be able to spot white trash rednecks ?

I hate ignorant people. I would much rather have that Battle Flag than a Mexican or Kenyan flag. Illiterate morons need to learn real history before they open their mouths.

take it down and put up mexico. CA houses the most illegals, undocumented anyway

I'm sure the Mexican and rainbow flags are sold and flown daily, though!

Censorship, discrimination and government control. While I wouldn't personally fly a confederate flag, I believe this should be interpreted as freedom of speech.

"For the record, neither the design nor the content have anything to do with racism, slavery, hatred or white supremacy. or anything worse! All the COLOR could be removed from this flag, leaving just the outline of the details, and the true message the design is sending could still be determined by anyone with a basic knowledge of history and an ounce of common sense. First of all, this flag is NOT the "Confederate Flag." It is the "Battle Flag of Northern Virginia." This design, however, is the one most synonymous with the term, and the one used in various forms on many of the other flags that were flown by the Confederate States. It is also the one most hated by those who are completely and totally ignorant of what it stands for.
So take another look at the flag and answer this very simple question : Do you see a big letter "X" anywhere on the flag? What if you were to lay that X down on its side? Do you see it now? The X is formed by the big, blue bands which are outlined with white trim. Now take another look at the flag. On this big "X" there are thirteen white stars. Do you know what these thirteen stars represent? They represent the thirteen original, united colonies from which the United States began. Each one of these colonies had its own system of self government until the start of 'northern aggression' when the northern states began trying to usurp authority over the southern states. This was the main cause of the Civil War. Point of fact : The thirteen stars on this flag appear to lie on the blue X... but in reality, the X lies on the stars, allowing them to shine through. Now, a simple question : Do you remember from your grade-school years how the teachers would sometimes ask you to circle the right answers or picture on a work page, or to put an X on a picture or word or other item that didn't belong in a group? That is the same concept this flag is designed around; the stars are laid out in the pattern of an X, and the blue bands are put on the thirteen stars to show that the southern states no longer wanted to be a part of the union with the northern states. In simpler terms, the message of flag's design is simply this... CROSS US OUT of your Union! The southern states withdrew from the union in a movement called "secession," which led to the Civil War. That is the only message this flag is sending. That is all there is to it. If this flag actually represented slavery, hatred, white supremacy, or something worse, as so many biased and uneducated people so foolishly believe, then it's design would reflect that by incorporating images of those whom it stood against, and there would be a big X on their images. But that is NOT what is on this flag!
This flag is NOT racist!"
-History people, it's a beautiful thing to learn.

9:03 But the people who fly it are and are making a statement.

I know of a house in Salisbury that has been for sale, forever, because the next door neighbor flies a confederate flag. No one wants to live next to them.

Oh yeah - liberal, progressive democrats displaying their tolerance of others, and their respect for free speech. These people are repulsive.

I thought the confederate flag was white

It's little instances like this that chip away at your freedom and rights until one day you will wake up and realize you are a slave and cannot do what you want.

Anonymous said...
I know of a house in Salisbury that has been for sale, forever, because the next door neighbor flies a confederate flag. No one wants to live next to them.

One person that all. One person. So what is wrong with this person flying a Confederated Battle flag? Just because someone doesn't want to live next to them is their problem. I bet this person doesn't do anything wrong, but you misguided fools are offended by this flag because the Democrats told you to.

I would rather see that flag fly than a Mexican flag. People who fly the Mexican flag and the red, black and green flags are the true racists.

Anonymous said...
9:03 But the people who fly it are and are making a statement.

Why are they? Because you say so? What statement are they making? Something you heard because you are to stupid to formulate your own opinion.

ha ha Compton.. what a bunch of fools .. they think that California is still Mexican property