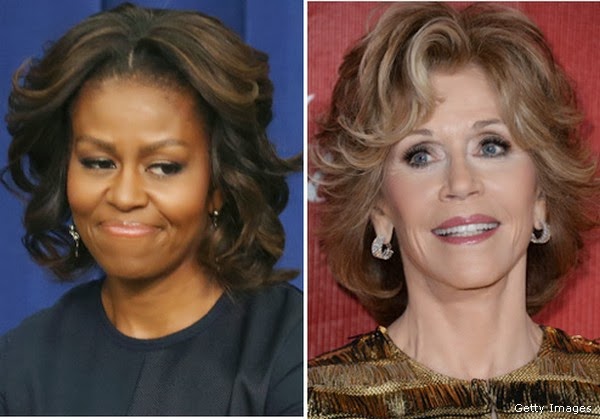 First Lady Michelle Obama says Jane Fonda is one of her role models, and that she admires her political savviness.

During an interview with People Magazine, Obama listed "Hanoi Jane" as one of the people she would like to look and live like when she's "70 or 80" years old.

What a shameful so called 1st lady we have. As a 67 year old Vet, I would cherish the opportunity to smack her right in the mouth!

12:52 Ok. you take her and I'll smack the stuffins' out of the other Communist.

To Our Distinguished First Lady: How many thousands of Gold Star families of Vietnam vets would like to be able to see what their loved ones would've looked like at "70 or 80" years old... The people that this true American traitor trashed, compromised, aided and abetted the enemy while her fellow Americans were fighting for her country?
Mrs. Obama's comments have given me still ANOTHER reason why I have never been less proud of my country in my entire lifetime.

Ship the traitor to Vietnam in the jungle were I'm sure she would fit right in.

She's on vacation too much to make any difference anyway.

Bet you a 1$ the lady has 1,286 pairs of shoes on the taxpayer dollar to go along with her multi-million dollar vacations.

you all are too funny..get a life

Wow! You used TOO, impressed!

3:40 Who is you all and who are you. Try posting your name you coward! You do not have the balls.

Jane Fonda is a true American patriot. She has apologised to the Vietnam Vets and is ashamed of what she did. Why not take a look at all the good she has done since for veterans and the families and survivors of veterans? Do some research.

4:54:
Some actions are beyond the scope of forgiveness. Granted, she was young, impetuous, and fervent in her beliefs, but when an action causes such extreme pain to so many in her country, especially to those families that lost their loved ones in that war, it makes it impossible for many (myself included) to grant her absolution.
I also feel that she "saw the light" that her career would be destroyed if she didn't attempt some sort of walk-back on her decision to pose on that piece of the enemy's military ordnance - a war machine that most likely caused the deaths of the same American soldiers that sacrificed their lives so she could go on to make millions in a land of freedom.
As for "all the good she has done"? Not quite sure what you are referring to. But I will say this: If I discover that she has donated a percentage of her income to Veteran's groups, I may ease up a bit on my criticism. I don't think that she did.

Could there please be reservations made for both of them at the Hanoi Hilton?!

And I'm sure that she's yours, Michelle.