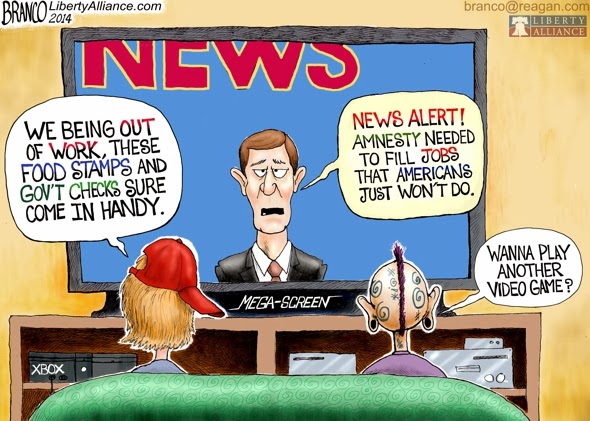 Another myth perpetuated by the media

Show us the help wanted ads in the classifieds that offer a living wage, and I'll believe this stupid cartoon.

Not every job is going to pay a "living wage". If every company increased their pay to the desired living wage, prices would go up in relation to the wage increase practically negating the increase in your pay check. Also, what are you saying? You are too good to work unless you get the $ you think you deserve? Time to grow up and do what the rest of the country has done for years. Get a job, work hard to move up and increase your salary. If you want to improve your station, take classes to gain the skills needed to find a job that pays the wages you desire.
I know, you are a special snowflake and deserve special treatment. Grow up.

7:44, I'm 59 years old and have worked hard and raised a family, and I'm a homeowner, snowflake. Read what you just wrote, then go out and buy a calculator and a newspaper classified section.

7:44 Not everyone can afford to go to college, that does not make them a lesser person than you.
I also see you clinging to that "work hard, move up" myth.
Most MW wage jobs are harder and take more skill than what your typical degree'd worker does.
Illegals are hired so that benefits do not have to be paid, are often paid in cash, rarely paid overtime. They are usually housed in squalor conditions. This is prevalent in farming and agriculture, retail and tourism.

Not everyone gets to be an astronaut, snowflake.

Try educating yourself before you type. The world has changed since your first job.

And, oh, there are a lot of "successful" people out there that never finished college.

People on this site love to hate on the young but it's the older generations voting habits that have put us where we are today. Makes me wish I could stop paying into social security sometimes...

Get rid of the excessive welfare and food stamps, close the borders, and these lower paying jobs will start to get filled (yes some of the wages may rise due to the deflation of the illegals)....or families will fail (Darwin style).

As was said already - they're not all supposed to be living wage jobs...not everyone can (or should) go to college (some shouldn't finish high school).

The attitude needs to change!

So, if they're not all supposed to be living-wage jobs, you suggest that people should work everyday and starve to death. No wonder crime is high. I'd never work a job that wouldn't afford me the basic necessities.

9:11 you need to educate yourself to the fact that MW jobs are now primary jobs for A LOT of people. They are no longer for kids and immigrants. And employers are more than happy to take advantage of this fact to get a more experienced worker for less. Your attitude needs to change.
How dare people expect to be paid a livable wage. Oh the humanity! They are outrageous! Get a job man, no get 2 jobs! Buy yourself and education! Work hard and maybe in 10 yrs you will get a raise!

Simple, Enforce the laws. Arrest employers who hire people who are not documented to work in the USA.
Fine should be very high. Make the employer pay all taxes that he would normally have to pay. Risk of losing business lic. The employee should not be able to collect any benefits. I talked to a person who works at the mall in the maintenance dept at the mall. The mall has been sold and a new owner is or is soon to take over. I asked this person if it was going to affect him and he answered NO because he would just collect unemployment and work under the table for cash. I know this person and this is what he does!! He is not alone.

@ Annie Nonymous, right, because this country didn't start going down hill until Obama... now that's some naivety. Lets also ignore all these knuckle headed congressmen they vote in term after term.

12:16 "they vote in"?
Are you possibly eluding that you are not voting?
All the "old" people I talk to are more than disgusted with the state of affairs. I find your comments naive and insulting.
Seems all politicians lie and once in office they are no longer looking after anyone's welfare other than their own.
Sorry but I don't think you can pin it on the "old" people you should be looking at your politician that turned into a traitor.

10:22 I wish it were that simple, you are correct, but most employers never get caught.
As far as your friend, I dunno what to say. He has to pay the bills somehow. I don't really blame him to some degree, because this is what happens when the middle class is being attacked.

If your only argument is twisting my words around that's not much of argument now is it? Come on, you're better than that, you're insulting yourself here.

For the record, I do vote, but I didn't vote for Cardin yet somehow he continues to stay in office and I know it's not the younger generation that's doing it.

Retirees turn out in droves to vote while the younger generation is filled with apathy that nothing will change. Were better informed for the most part yet we vote less, it really is a shame.

2:51 I simply asked a question, I did not twist your words.
But I have to say, based on what I previously said, the "older" voters seem to have the same feelings the younger generation does, that nothing changes.

That's why I feel your frustration is wrongly directed at the older generation and should be directed at;
your generation that votes less, but then complains when the outcome is not to their liking, and
the turncoat politicians that do not uphold the platform they ran on.

You have to participate to make a difference.

"I'd never work a job that wouldn't afford me the basic necessities."

THAT is a staggering comment. Not so long ago, it wasn't an option not to work because the pay sucked. You people need to lose this assertion that there is something new in all of this. Getting by on a single MW job has never been a possibility. Only difference is that previous generations didn't have EBT, welfare, disability, etc.

12:21 I agree to a point, but the tides have turned and sadly the harsh reality for many is they have to survive on a MW job.
And now they are getting pummeled by employers cutting their hours.