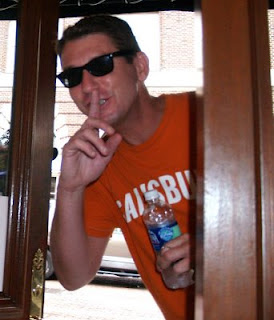 Wow, it's very rare that I get speechless but really, WHAT WAS THAT? I guess I'm more used to real men and real issues and I've got a lot of learning to do if this guy is my opponent because I've never dealt with his type.

While I'm still absorbing what was said I'll simply say this, for now. Number one, at least when I do go to Delmar, Delaware, I'm visiting my Wife and Grandson. You might even say Mayor Jim Ireton spends even more time in Delaware than Joe Albero does. The only difference is, he's in Rehoboth.

As for the Mayor's closing remarks, he stated I never confirmed my sources in my story. EXCUSE ME JIM, YOU were MY source and YOU refused to answer my calls and text messages. I did everything in my power to make contact with you. I even left you messages and you absolutely 100% refused to respond, well before the Police Chief came to your home.

As for the Police having PROOF your cell phone was on your dresser, that's is a bold faced lie. I hope everyone caught that statement. No Police Officer was in your room that night Jim watching your phone sitting on a dresser. You need to start getting your lies straight.

What's with all the "tea party" crap too Jim. I'm not a member of the Tea Party, nor have I ever been. But it certainly answers why Don Rush, (another talk show host who works for Mike Dunn) kept asking me that question a couple weeks ago for his show. I wondered why he was pushing that issue, now I know.

In the end, I think Mayor Ireton has shown his true colors. In my honest opinion he continues to disrespect the citizens of Salisbury by continuing to call me a "Delaware Blogger" even AFTER being served with a lawsuit. I counted at least 6 times in that interview. He openly doesn't care about what this could cost the taxpayers but most speculate the City won't have to foot the legal bill on Ireton's behalf and that is exactly why I sued him personally and NOT the City.

It should be known that I sent Salisbury Police Chief Duncan a text message yesterday stating that according to Maryland Law, once an investigation is closed the "victim" must be afforded a copy of the Police Report. I asked when I might get my copy, she never replied. To this day I have not seen the Police Report for more than 2 or 3 minutes and it's probably 20 pages long. So Ireton making claims stating I had one is completely false. I will NOT FOIA the information, I will be given a copy by law enforcement, period. They are caling me a victim, the case is closed, I deserve a copy.

OMG, I forgot. Mayor Jim Ireton said, he has "no malice towards the reporter". OK Folks, IF that doesn't tell you everything right there, well, I just don't know what else to tell you. Ireton is acting like this WHOLE thing I my fault and even goes so far as states the above. Are you kidding me Jim, seriously? You should have just answered your phone, answered your text messages. YOU chose to make this as big as it is today and you continue to prove your immaturity by calling me a Delaware Blogger.
at 6/29/2012 11:55:00 PM

Just consider the source Joe. He knows he will not get reelected so he continues his lies. Nothing new to Jim Liarton!

I heard he spends a lot of time in hershey park.

I mean no disrespect but is Jim Ireton gay?

If Ireton runs again you will be the next mayor.

Thank you Mr. Russo. The rest of the media should be ashamed of themselves for not touching on this incident. This interview showed me who Jim Ireton really is and I will not cast another vote for him again. My teenage kids act more mature then this guy.

The guy is a joke. He was a part time teacher that wanted to be mayor. Salisbury you got what you deserve.

Thank you. I wondered after listening to that interview. It explains a lot.

He ran like a sissy when he was on council and quit after Tilghman bullied him. He'll fold under your pressure Joe. Keep up the good work.

He realy screwed up calling you a Delaware blogger in that interview. If you need another lawyer just put out the word because the punitive damages are a dream come true in this case.

That guy has no clue. I hope you personally sue him and he has to defend the suit personally. Just like when asked if he was gay he should have said yes. It was not the point that he was gay it was the point that he would stand up and answer the uncomfortable questions with truth. Jim we all know you are gay and are laughing behind your back. The denial just shows his true character and when the times get tough he has no spine and will run, hide and play games. It’s over JIM time to hang up the towel. It was a fluke that got you elected in the first place and that will not happen again!

I hope the voters remember the games Jim likes to play!

Jim has so lost any chance to get reelected. Joe, you were proactive in that interview. Jim was reactive. He has nothing to stand on record wise as mayor and you have great ideas. Thanks for the tip on the interview. You have my vote.

I also own a home in Delmar, DE and Ocean City, MD. I have property in Pittsville, Powellville and Willards. I do have a vehicle registered to my HOME address in Salisbury, MD as well, for those of you asking why my truck has Delaware tags. I'm sure if you ask Sheriff Mike Lewis and States Attorney Matt Maciarello they can varify this information. I have nothing to hide.

Again, Mr. Ireton wants to sway the voters into believing what he says, yet the Mayor hasn't checked HIS sources because ALL of this information is at his fingertips.

You see Folks, Ireton doesn't want to talk about ISSUES or his TRACK RECORD. My ideas are not only better, they're realistic and rebounds away from the debt this Mayor is costing the taxpayers. But he doesn't want attention towards what a Mayoral Election is all about. He'd rather sling defamatory remarks towards a better candidate.

Keep in mind. The Mayor's job only pays $25,000.00 a year, so maybe I do have a mental condition, as the Mayor stated. While I can easily come up with far better ways to make a far better living, it isn't about politics to me. It's about using MY past business history to better the community we live in.

We've got a long way to go but one thing is for sure, once the masses find out what I plan on doing and how exciting that path is, Ireton will fold so fast he won't know what happened.

Think Jim would take a ticket out of town if he were offered one. Can we take up donations. How much for a ticket to, lets say, San Francisco?
Who has the first $20.00?

The interviews were great and well worth waiting for. Russo did a nice job. The mayor spewed too much venom; after that, it was hard to give him much credence. Like a lot of progressives, he railed about his opponent personally. He derided the political opinions on the blog, yet had nothing positive to say about his own positions or accomplishments. I know that would have been slightly off-topic, but politicians are supposed to do a little campaigning. He found plenty of time to attack, though.

What a contrast to that "Delaware blogger" with the alleged mental condition. Calm, restrained, personable...but if Joe pursues the lawsuit, won't there be a lot of testimony under oath by some people who may have given false statements previously? Won't some high-ranking local officials be forced to come clean about their roles in this mess?

Hmmmm, how about it, Joe?

I should add, Code & Compliance has confirmed my residence in Salisbury as well.

No matter what you nay sayers come up with, I'm a qualified candidate to run for Mayor for the City of Salisbury.

Now, IF the citizens don't want me as their Mayor they can prove of such at the voting booth.

What scares you guys to death is the fact that you already know I'm going to win and ALL of your good old boys will be the ones being forced to move their businesses and residency elsewhere. You should reconsider though. This WILL get a whole lot better in Salisbury in no time. You just won't be making MILLIONS off the taxpayers any more.

So is that all you've got, the resident issue. Remember, YOU have to prove I'm NOT a resident, not that you and certain public officials haven't been trying over the past few months.

By the way Jimmy, send Code & Compliance to my home in Salisbury as often as you like. I have nothing to hide.

Here's the bottom line. Jim said he "voluntarily" turned over his phone records to SPD. Does that mean he printed them out and edited them, or did he give SPD the same right as they stole from you to get them directly from the phone company? In other words, is this real, and will you as a victim be able to see this?

and being a tea party member or supporter is bad because????

those of you who make fun or don't like or are leary of the tea party; you're not educated. get with it soon. you'll be sorry if you don't.

from a proud tea party supporter...

Think Jim would take a ticket out of town if he were offered one. Can we take up donations. How much for a ticket to, lets say, San Francisco?
Who has the first $20.00?

He is going out of town as soon as the interview is over. He has a date with a new "friend" he met on an online gay dating site.

Why would a reporter sacrifice her job (and possibly her career) for Ireton?

wow joe I didn't realize you owned some much. You might be right up there with Romney, I would say obama but I figure you bought those place rather than have them just given to you. Now Jimbo can paint this as the big mean rich guy coming after the little guy! And I'm sure all his rohoboth buddies will confirm he is the little guy!

Why dose it matter where you live? If you can do the job then go for it. Next if you live in Maryland you won't be able to work in Delaware, or the other way around. I wound not mind you living with youe wife if you could still help us here in Salisbury (you have for years).map

Wow Joe, Kinda like saying Obama is not a citizen....How does it feel?

"Why dose it matter where you live? If you can do the job then go for it."

Yeah, why would we want to require a mayor to actually live in the city he serves?