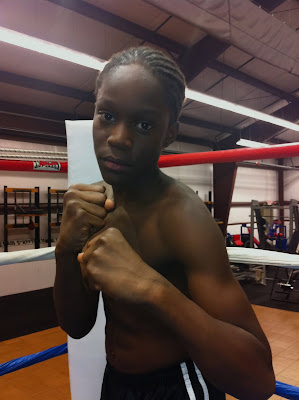 Main Street Gym's, Corey Moore, came away with a silver medal in the Regional Silver Gloves Tournament, held last week in Wilmington, N.C. After three days of competition, Moore came into the 14yr/15yr 100 lb championship bout on Saturday, having never been to this level. Corey was nervous going into the championship, giving up both size, power and experience, but he listened real well to instructions going into the second round and stepping up to make the bout close. In the end, Moore was edged out on points, walking away with the silver medal. I am so proud of Corey for this accomplishment. He got very close to making the nationals and he helped his Maryland team win the first place team trophy with his silver medal.

Corey has been in the gym for a while now and did not come out of the gate racking up wins. Most kids would probably have gotten discouraged had they been in his shoes, but he just kept training and coming to the gym, even on those nights that I knew it was hard for him. He also kept getting better and began to impress both the new members of the gym as well as the older member that saw the progress. Once he started putting things together, you could see the change happening and that was great to watch. Sure it's nice when kids can come into the sport and make a big splash early, but it's even more satisfying when a young guy like Corey perseveres over time and comes from behind to excel. It's like the story of the tortoise and the hare. It helps reinforce that you don't have to start out a superstar to be good at something. It shows that slow steady progress can take you as far or further, plus it's a real character builder" said Main St Gym's coach Hal Chernoff. "Corey is a very reserved and quiet young man. He stays close to home and doesn't travel much and has never been to a competition like this. My main advise to him was just enjoy the experiences and have fun. It was nice when he confirmed that's exactly what he did and brought home silver. I think I can safely say this has sparked something in Corey and there will be.... Moore see"
at 1/12/2012 05:45:00 PM

Congrats Corey! This is such a positive influence for him. Great work Hal.