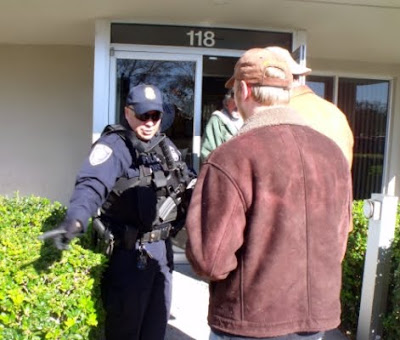 
“With their blue and white SUVs circled around the Main Street office, at least one official was posted on the door with a semiautomatic rifle, randomly checking identifications. And other officers, some with K-9s, sifted through the building,” reports the Daily Commercial.

The activity was part of Operation Shield, an unannounced drill conducted by the DHS’ Federal Protective Service centered around “detecting the presence of unauthorized persons and potentially disruptive or dangerous activities.”

Thomas Milligan, district manager for the Social Security Administration office, said staff were not informed their offices were about to be stormed by armed FPS officers. DHS officials refused to answer questions asked by local media and left with no explanation at noon.

omfg. This crap should be a slap in the face to every 'real' American out there.

I'm not sure if I'm spelling this right...but it ghestuppo tactics. Welcome to ww2 germany

Ok...first "dwi" check points on roadways. Then check points in front of Soc. Sec. buildings and scans of people inside. Roving backscatter x-ray trucks on the highways. Anyone see a pattern here? Next it will be at the rain stations, subways, and bus terminals. Remember the pictures in the hostory books of Nazi's checking people at the train stations? KGB cjecking people at airports and train stations? How can anyone not see this? Sheeple. I'm glad my family and me are preparing for what will inevitably follow. I guess we are "preppers" like the people who have been writing those articles for you.

Such a shame.
A lot of good men will die following the governments orders when the proverbial s**t hits the fan in exactly the scenario we see in Syria today. American citizen's are only going to take so much before rebelling like our fore fathers in the revolution. Long live free America.

So just how free are we Americans

Next it will be at the rain stations, subways, and bus terminals.

It has already happened there long before this became news.

You watch. Some nut will start targeting these groups and then they will really come out in force.

Poor attempt to justify their jobs.

As far as I'm concerned they can cut the whole DHS department, homeland security is what our military and National Guard are for.

Every American should be a nut and target these groups. Their activity is warrantless and baseless Not to mention unconstitutional. It is a completely unnecessary show of militarized force to peaceful citizens going about their business. What is the purpose?
Why are they doing it?
To keep us "safe"?
Who is going to keep us safe from the pathological nuts in uniform?

Bad things are going to happen. They always have and always will. You can not always prevent evil. That being said, I have said it multiple times. It really is funny how the US changed after 9/11, and to see those buildings come down demolition style after being hit by airplanes is pretty weird as well. Top that off with ever possibly "secuirty upgrade" they can possibly think of, aka taking away the rights of the US citizens. Eveyone thinks a conspiracy theory is bogus until it comes true. Have you have ever watched the movie iRobot with Will Smith? The robots revolt because they are "protecting" their owners from themselves. That sounds excatly like this country.

I agree but had to tone it down so I would not be 'targeted' by our 'protectors'.

Federal Protective Service??? Who the hell invented that? ...another Federal law enforcement agency is all we need....NOT. I guess the FBI, CIA, Federal Marshalls, ATF, Secret Service, ICE, Customs and Border Patrol, TSA and probably many others we don't even know about weren't enough. The growth and control that this Federal government is amassing should scare everyone.

God they make feel safe.like when you go to an airport and they feel up a 80yo woman in a wheelchair all to keep me safe.Thank you for doing such a wonderfull job.

TIC TOC TIC TOC Time to wake up people don't be a sheep.

You must be talking about the Americans wearing a badge.