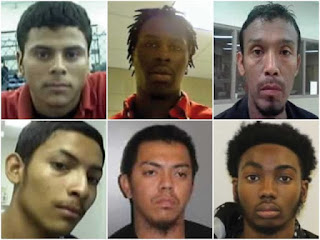 The sanctuary counties of Prince George County, Maryland, and Montgomery County, Maryland, may soon release six illegal aliens who are accused of a number of violent crimes against children and American citizens, according to Immigration and Customs Enforcement (ICE) officials.

Jaycob Kidlat, an illegal alien, has been charged with five counts of sexual abuse of a minor, rape of a child under the age of 14-years-old, and third-degree sexual offense. ICE placed a detainer on him in June and it is unclear when he will be released, and if he will be freed rather than turned over to federal agents.

So glad I didn’t send my child to University of Maryland.

Maryland should be called "LIL California". And the Democrats state they are pro-Police. That is like saying AL Sharpton is not a racist and does not owe back taxes.

Somebody there should be waiting to Take them out

They should stay in jail where they are safe / Deport them

Lock up the Sanctuary officials responsible

They will fit right in here in Slumsbury.

We need a new state of Delmarva and be done with the western shore.

This is where the people should step in and serve justice, not only to the criminal aliens but to the Maryland State employees that are endangering citizens by releasing dangerous convicts into our neighborhoods to make political statements. They need to be met at their homes, served, tried, convicted and punished severely on their front porch. The ENTIRE chain of command should be dealt with in this manner in a coordinated operation. Partisan political hacks in positions of Government authority need to be smudged and taught a lesson. Judges too, find them, punish them. At the club, Friday night dinner or on the course Saturday morning. Chase them and harass them just like the liberal morons. They can not act out their political beliefs without paying a huge price. This will “persuade” and “convince” them to be respectful of their authority and benevolent positions. Beat the living snot out of them!! Same with library directors that try to pervert children with drag queens story time! Lol Stop the perversion and destruction of our society! Enough is enough.

I'm surprised Fake Jake hasn't made Salisbury a sanctuary city it's the only crime in Salisbury he hasn't done. Then he could have a mural of him inviting them all in more handouts, rapes and murderers, but then there is no crime here!