Troopers Arrest Juvenile for Threats Made to a High School 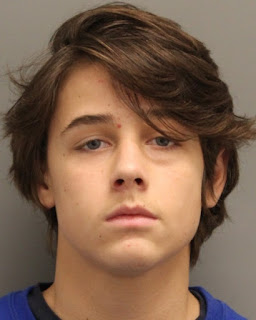 Magnolia - Delaware State Police arrested a Magnolia teenager after it was discovered that he posted threatening comments on social media towards a High School.

The preliminary investigation has determined the incident occurred on Wednesday, January 24, 2018 at approximately 10:00 a.m. when Troopers were informed by an employee of the Caesar Rodney School District of a concerning post that was posted on social media. The post depicted a subject holding a handgun while making a threatening statement towards Salesianum High School, Wilmington. Through further investigations, it was determined that the subject in the post was identified as 14-year-old Timothy S. Walters 3rd. Timothy had recently been removed from Salesianum High School and was in the process of being enrolled at Caesar Rodney High School.

On Wednesday, January 24, 2018 at approximately 11:50 p.m., Troopers responded to Timothy's residence located in the unit block of Apple Blossom Dr., Magnolia. Contact was made with Timothy and his mother. It was discovered at this point that there were firearms in the residence that had all been accounted for.

On Thursday, January 25, 2018 at approximately 1:05 p.m., Timothy was brought to Troop 3 with his parent, and subsequently charged with Possession of a Firearm (Handgun) by Person Prohibited (Juvenile) and Terroristic Threatening. Timothy was arraigned out of Family Court and committed to the Stevenson House Detention Center on $12,500.00 secured bond.

It's a good thing that follow through was done in this case it just could have saved lives. Threats of this type should always have follow through by the police and the courts. From a person that has been threatened recently to my face and the following day shots at our house and twice in the same month take it seriously, is my advice to anyone. And if your a teenager out there and you think it's a joke and something to blow off, it's not, look at the number of school shootings just in the last 15 years.

Already removed from one school, making threats to his new school? Not the fresh start one usually thinks of when changing schools. I went to 3 high schools as we moved a couple times.

What problems can a 14 white male, and not an awkward looking kid, mind you, have to call in a bomb threat? That's just bad parenting, in my opinion, which is not much, I'll admit. His parents must be separated or really not paying attention, but such is the case with many kids today.

So much hate in that face.

Look at his face. He would just as well kill you as kiss you. He doesn't care which. Just look.

3rd rather than roman numeral's - times sure are a changing!