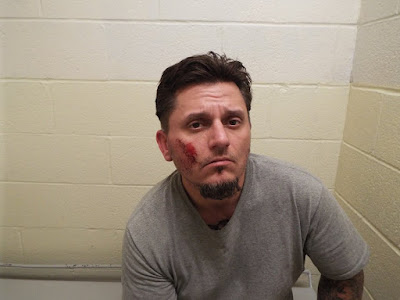 Narrative: On December 5, 2017 at approximately 1040HRS, the Wicomico County Sheriff’s Office responded to the PNC Bank
located at 1512 S. Salisbury BLVD, Salisbury, Maryland in reference to a robbery that had just occurred.

The investigation revealed that a white male, later identified as Robert Lee Hornsby Jr, had entered the bank and handed a bank teller a note demanding money and indicating he had a firearm. Hornsby fled the area in a black Chrysler 200 vehicle. The Wicomico County Sheriff’s Office notified allied police
agencies of the vehicle and suspect description. During a canvass of the area, Salisbury Police Department detectives located Hornsby and his vehicle in the area of RT 13 and Vine Street. SPD detectives attempted to make contact with Hornsby. Hornsby fled in his vehicle. Units from the Wicomico County Sheriff’s Office and the Salisbury Police Department pursued Hornsby. Maryland State Police also assisted. The pursuit traveled through Salisbury and ended in the area of RT 50 and RT 50 Bypass, near White Lowe Road. Pursing units forced Hornsby to stop his vehicle. Hornsby purposely rear ended a WCSO Department vehicle during the forced stop, causing minor property damage.

Robert Lee Hornsby Jr was arrested and is in the custody of the Wicomico County Sheriff’s Office
pending transfer to WCDC.

Uh oh. Looks like he “tripped” on his way into the station. Oh dear, how said, never mind.
Sh!tbag.

I hope that's road rash on his face and some Policeman threw his punk ass to the ground buried his knee in his back cuffed him and hopefully read him his rights. Now pick up the pace there a few more running around here that should be behind bars.

Nice road rash. When will these clowns learn?

Great work. Get this scum out of here.

So did he rob the Savings Bank of Hebron too or did someone else?

Well for one thing, the MVA tag fees are now astronomical ($180.00) whereas they used to be $20. And another thing, real estate taxes are also astronomically high here in Wicomico/City of Salisbury.

Second thing, there are no jobs, they've all moved abroad, and the construction industry is crippled because of the residential fire sprinkler ordinance that was voted for by Jim Mathias.

There must have been twelve city and county cops chasing him down Vine Street.

He must think he's a tough guy. Wait until Bubba in the graybar motel meets him. We'll see how tough he is.

Is he a repeat offender?

5:19 seriously! The economy is booming, jobs are available if one might want to work, even for career criminals. He chooses the life of crime but we have people like you making excuses for him. Maybe he should become a healthy member of society instead of a burden on society.

Lol he is a hudson center grad.

He is posing like he think he is going to snag a modeling contract. Lol. I want to see the 1 week, orange jumper, nice shape up and hair cut gone, inmate #66666 portrait pose

There are tons of other counties/states that cost A LOT more than that yearly. Consider yourself lucky instead of crying about it.

Why? Just armed bank robbery? Why did you help? Scared ?

This guy is a bad dude. Check him out on case search. Long, long record to include felonies and animal cruelty. Lock his ass up. He is a menace to society!

Jobs? Where - Dunkin, Wal-mart, Sam's, Wendy's, McDonalds, Royal? In case you haven't noticed, look-a-round and all of the mfg. high paying jobs have vanished.

I agree with 6:00 PM poster, and you can add human trafficking to the new millennium list that includes bank robbery and drug dealing.

Huh? Are you excusing this ??? What does a damn sprinkler ordinance have to do with it???

Yup. He’s about to find out why they calm prison the “pokey” 🤣

Not condoning the robbery but where exactly is the economy booming? Are you talking about the 200,000 new hires reported in the news lately? ...seasonal jobs but that fact doesn’t get reported.

Responding to 7:46 Post that said What does a sprinkler ordinance have to do with it?

I believe what the original poster was referring to is that the sprinkler ordinance killed construction industry jobs as the cost of fire sprinklers is a deterrent to building residential homes. Everyone is talking about it, at least here in Maryland.

Lock him up for a long time judge. Great work law enforcement.

7:35 PM not sure what you are talking about, when i searched nothing came up

He's a repeat offender and they should charge him as such. He is a drug addict with multiple violent felonies under the first name Bobby.

You all are so corny, it’s always wait till bubba gets him. Stop watching so much tv

Ok...your point being??? What that tells me is he was taking the steps to better his life at the time. Im pretty sure opiates had a role in this. Opiate addiction sucks for the individual and society. NO-ONE and I mean NO-ONE WANTS to be addicted. Even the ones cought up in it. It is a miserable lifestyle. That leads to stuff like this becouse withdrawal hurts really bad and the only thing dealers care about is.....the mula!!!! And the main thing addicts care about is being able to function like a normal human being.

I’ll leave this here for you.

To 6:11 pm , I must agree with 5:19 Maryland and California are the only 2 states with the fire sprinkler system required in single family homes. We all know how well Ca. economy is. We are told realestate is back to an all time high, well no so in Wicomico Co. In 2006 building lots were assessed at 90k and now about 45k and home prices are very low here. Good for buyers not so good for people who own property in this county. Most other areas of the country are doing well including lower De. When construction comes to a crawl crime will rise. Not many good paying jobs in this area and a lot of thugs thanks to our prison that brings the thug families to Salisbury.

This is not excusing what is done.
Unfortunately like so many He had a real s@#ty start, got hooked on oxy then robbed a pharmacy and went to jail for a long time. He had to join a gang and assimilated to prison life to survive. He came out prison fresh after serving his time looking vigorously for a job. But being still with the logic, slang, tatts, and mentality of prison couldn’t be around customers especially in this don't hurt my feelings sensitivity training libtarded society. In translation couldn’t hold down a job, with all his talent and skills. So, pretty much did what he knows best in desperation figuring one of three things. One I'll get away. "Didn’t happen!" Two I'll die. "He's ok with” OR three I'll go back to what I Know and where I'm accepted. "Ding. Ding. Ding." We should all just thank God no one got hurt in this tragic story. Great work law enforcement.

Bobby Lee, I'd like you to meet your cellmate BUBBA!

925 cry me a river. Why was this pos even allowed back on the streets. Maybe we should just provide him with a really strong dose of his favorite drug. Skills? Rocket scientist? NOT!

Why? So, now he gets three hots and a cot that I have to pay for while I am barely getting by myself? Maybe I should rob a bank too! I can think of a whole lot more things that my taxes would be better off going to besides taking care of a lazy, grown behind man!

by the looks of him he'll probably be bubba

this moron actually thought he could rob a bank and get away? lolololol nobody gets away with robbing banks anymore this isn`t the 1950`s and besides that banks don`t even keep much cash anymore,even if he got away with every dollar that was in the bank it wouldn`t be enough to buy a good new car or truck.
Those banks probably had less than $30,000 cash in each of them,everything is done electronically now banks don`t keep much cash anymore.
The judge should give this idiot an extra ten years on the charge of being a moron. idiots like him are too stupid to survive outside of a prison.