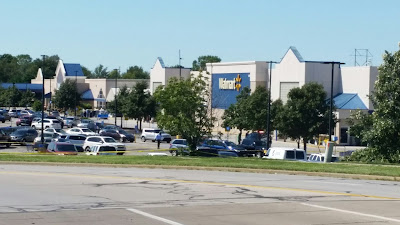 SHAWNEE, Kan. -- Were it not for two heroic strangers who risked their lives, a Kansas City mother and her baby may have not survived an attack in a Walmart parking lot. And most likely, neither would they.

It happened in Shawnee, Kansas, over the weekend, police told CNN.

Two men attacked the 39-year-old mother as she was putting her baby in a car seat. They struck her in the back of her head, said Shawnee police Maj. Dan Tennis.

Hearing the mother's screams, the brave bystanders rushed to help.

One was shot -- multiple times -- when one of the attackers, later identified as John W. Simmons III, pulled out a gun.

The second rescuer had a gun of his own and he fired back, killing Simmons, police said.


Update to the above story:
Man charged with attempted murder at Shawnee Wal-Mart was on parole for drug, involuntary manslaughter convictions
at 9/14/2016 04:15:00 PM

Packin' heat and saved a woman and a child.

NEVER think you need any cop or politician to tell you if it's okay with them if you carry a gun.
There's a document so valuable that it's protected by bullet and bomb proof glass and even protected against nuclear attack.
It's called The Constitution.
NO MAN gets to dole out our rights to us or tell us which ones he will let us use.
THAT person is THE reason we carry guns. Saving a woman and a child is just a nice bonus.
Keep cheering.

Second guy should get "Hero of the Year" award.

I just want to know how we have reached this point. Just what are we doing wrong where our own children are murdering their parents? Is THIS what Obama has done for US?

Yes, this is the point we have reached. Just look around. Salisbury and Seaford are both well out of control. You had better plan to protect yourself, because there are not enough police to do it.

No, it's not Obama. It's just that people have no regard for anyone else. Put the blame on the ones doing the killing not on the President.

In maryland however the good samaritian would be under arrest for carrying, then sued by the scumbags for violating there rights. What sickens me more is this state is run by a bunch of commie libtards.

Arrest someone in Maryland for shooting a ltlle bi**h like that. Go ahead.
If I'm on the jury, he's walking, despite the self-righteous and self-serving speech that EVERY States Attorney in Maryland would give to the jury
"Ladies and gentleman, this man saved a woman and a child. But he killed someone, too. He didn't wait for the police. He didn't ask the man to stop. He just killed this poor soul in a vigilante rage. WE never gave him our permission to carry a gun, either. He just decided he knew better than his leaders. The State cannot allow it citizens to just kill criminals, no matter what! The State asks the jury to convict this man of murder!!"
In THIS state, the government would MUCH prefer you die, your kids die and your family dies before they LET us use the rights that we are given by God.

Jury nullification. USE IT.
Carry a weapon, too. ALL the time. I'll bet that woman never thought she might get killed in the parking lot of Wal-Mart that day.
And I'll also bet the little bi**h who attacked her never thought there would be a good guy around to put a couple bullets in him.
Who wasn't wearing a badge.
Sometimes, justice can't wait 10 minutes for a cop to show up. You know, to file a report and put some tape up.

Never wait for a cop. He will just give you a ticket.
Protect yourself.