A Viewer Writes: THE PUBLIC NEEDS TO KNOW 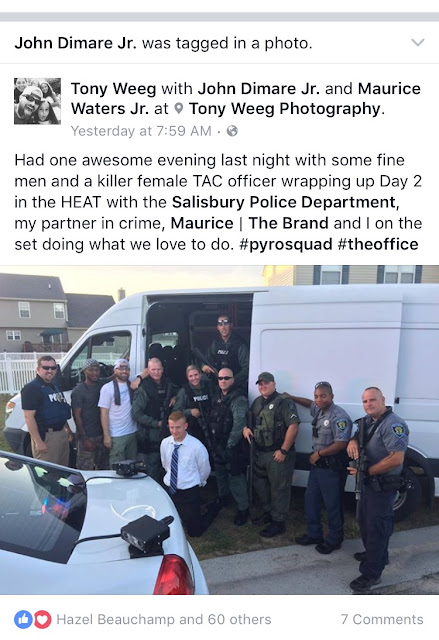 
In the climate that is going on today with all the scrutiny the law enforcement community is under, I am a shocked and sickened that this is how Salisbury PD is choosing to portray itself. Not to mention the amount of tax dollars being wasted in this picture is OUTRAGEOUS. And lastly I'm not sure if this is a promotional photo shoot or what the nature of this was BUT it's a gross misrepresentation of the "diversity" in the dept, that female is NOT a TAC officer and in my opinion is disrespecting ever officer that's put in the time ,commitment and sacrifice to be a part of such an elite unit, not only is Salisbury but across the country. What is going on at SPD and why is no one being held accountable ???

Frankly I do not get this post at all Joe? Maybe you can enlighten me.

What is the poster concerned with and why. Maybe they have a valid concern I missed.

On the other hand, maybe it's just an unsubstantiated rant.

Looks like the poster is very jealous and resentful to be making such chickencrap comments.

The 'elite' attitude is what's causing a lot of the problems in public interaction these days.

Is the job tough? Sure it is.

But you knew that going into it.

We appreciate the risks you take to serve and protect, but let's shake off the elitist attitude.

Wrapping up the big hostage rescue exercise and they decided to stop to take group photo. I can see why somebody would be upset. Can't let people celebrate a little brotherhood and pride in their cater and accomplishments. All the problems in the world and this got you upset? Get a life.
Giovanni Jones

I too dont see what the OP is complaining about. A picture?? Im sure that everyone takes a picture at work at "special" times. Probably good for morale. Dont see who paid for the picture or if there was even a charge for it if it was ever printed. I know none of the officers in the picture, but I am glad there is enough comradeship for them to do their work and get together for a quick snap. I no longer live in Salisbury, but I would love to have the Police practice come to my neighborhood. OP needs to relax and quit being so hyper sensitive. There are bigger and better things to get concerned about in the bury.

To answer your question, Noting is going on at the SPD that is the problem... What do you expect from people who are supposed to protect and serve but are not to ONLY ENFORCE LAWS, to which they tell you, if you don't like the laws we enforce for to congress and get them changed, easy to say coming from the ones who are abusing peoples rights isn't... Don't ever expect a cop to be held accountable, the only time one is, is to only shut people like you up so that you will think there is accountability... Cops are allowed to lie to get evidence to use against you, does that sound like they want to protect or serve you? And future more if cops are allowed to lay and do on a daily basis, isn't it quite possible they lie when off duty too? The ass cheek sucking cop lovers don't see it that way, they see it the way that no cop can do no wrong, and when they are proven to be wrong, you don't hear a damn peep form them... The reason, no one likes cops is becasue not only to they abuse you, but they work with and closely too, judges and DA and all of those sorts, whom plot against you to put you in jail, does that sound like they want to protect or serve??? In today's times, have you seen any cop stop another cop from doing wrong? The answer is NO... If a cop shoots you or abuses your rights, they get a paid vacations while they are investigated which we all know, "they didn't violate policy" which means not only do all cops look out for each other, they have a policy where they are allowed to commit crimes, becasue when they commit crimes and the chief comes on tv and says we stand behind our officers, they did not violate policy, there is no more proof needed to see this is true... On the other hand, if a cop does something illegal, or breaks into your home illegally, and you defend yourself, or the cop gets hurt, you go to jail for basically the rest of your life on felony charges...

How can you call someone, who gets paid by tax payers dollars, essentially a welfare recipient, and someone who abuses you and your rights, and gets paid to ruin your live and others lives, a hero????

And those of you who revert back to the typical talking point, I hope you don't need a cop one day blah blah blah crap, your point is moot... You are more likely to die by a cop than a damn terrorist, unless you consider a cop one...

Gloomy Gus. How many officers around the U.S. take pictures and put it on Instagram?

Well the 3 officer from the end needs to lay off the free donuts thought you had to be in good shape to be on the swat team,also why am at it anyone see the female officer who drives around in The white dodge charger with big rims on it looking more like a drug dealer thug then a cop,the chief of police shouldn't even let her park that thing in the parking lot.spd is the worst when it comes to police agency on the shore.

Not a good way to have someone represent your police agency at least take the uniform off first,before you go riding around town in that thing sticks out like a sore thumb anyway,represent the badge lady

That's a high end photo?? Note to myself don't hire that photographer for my wedding. You people need to get a life SMH so what if they participated in a drill and took some pictures. They need all the practice they can get for what's happening in this country, you complainers are going to want them to be trained when someone comes for you and your family.

Brandon Lee Caton, get over it. Someone sent me your Facebook comment and quite frankly you need to get a backbone. That goes for the EBT Blogger and his man crush for me too.

Damn 2:48 (first one), I got worn out and stopped reading your rant. If the cops lie as much as you claim, they qualify and should run for president of this great nation. ( disclosure ) I'm not a cop or ever been one and don't know any cops.

To the person who attempted to say I need to get a job like the people in this photo.

Let me assure you, I did my time, (work wise) and retired at 40 years old. I see several people in just that photo alone over 40, LMAO. In fact, I've been retired almost 15 years, longer then the rest of the people who have to work for peanuts.

I own all my multiple properties, have no mortgages, no car payments. I pay gas & electric and insurance. To say I need to go to work, been there, done that.

You wouldn't happen to be that Blogger on disability and food stamps, would you?

if you get offended by photos and comments, please delete your internet

the female "officer" with the white charger.. first it was a challenger. 2nd shes was a civilian not a police officer and 3rd she hasn't worked for spd in 6 months or more. The 3rd officer is not tac he's on the k9 unit. To bad when people write they don't need to have facts..

To the person who attempted to say I need to get a job like the people in this photo.

Yeah, dude. Like you just sit around and watch game shows.

How long are your work days now??

We'd be properly screwed if you actually retired!! :-)

Seems like Officer or Detective (that's funny) Caton needs to quit crying on social media and realize that as a public official and officer he does not have a fee dome of speech. I'm am certain that he will be chastised at the least by his chief and the Mayor for acting like a 14 year old in a public social media post. Brandon grow up. Your brother who is an investigator for a large retail chain investigates more serious crimes than you and is certainly more mature.

For once I'm glad to see SPD out getting the training.....everyone takes pictures and post them.....no big deal. I'm just glad the "Chief" is absent from the photo....she's probably on her crime solving computer in the office.....

Who ever wrote this complaint is a cry baby whiny pants.

gee, all those tax dollars spent taking that selfie with a phone camera... hope it wasn't roaming charges, LAWDY!