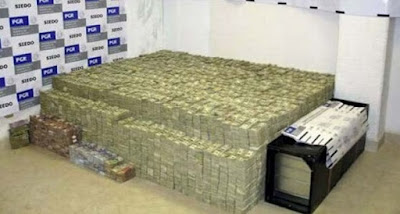 A relatively obscure audit report from the Office of Inspector General of the United States Department of Defense suddenly is getting a lot of attention for what it apparently reveals: The Pentagon can’t account for $6.5 trillion.

At ArmstrongEconomics, the blog reported, “Once again, the office of inspector general has come up with a huge hole in the Department of Defense with a missing $6.5 trillion.”

The day before 9/11, Defense Secretary Donald Rumsfeld admitted $2.3 trillion was missing from the Defense Department budget, noted the blog.

That figure has now grown to $6.5 trillion and counting.

To get a handle on its magnitude, a pile of $100 bills in that amount would be enough to make every man, woman and child in the states of Colorado, Wyoming and South Dakota an instant millionaire.

The report, “Army General Fund Adjustments Not Adequately Documented or Supported,” started out with the goal of finding out whether the changes in the Army General Fund data during Fiscal Year 2015 to financial statements were “adequately documented and supported.”

THERE is our spending problem...

screw medicare, give me my million and I will self manage my affairs.

Supposedly the section of the Pentagon that was hit during 911 contain the files concerning the missing 2.3 trillion dollars which is now grown. So who's really behind it?

See, this is the BS we're all tied of! Where'd it go? Who's the "accountants"!? This is a reason I'm voting for who I'm voting for! If money was missing from my business and couldn't be accounted for, your a$$ is fired and your going to jail once proven. Fact.

A trillion here a trillion there
Soon you are talking real money!
Sen Everett Derrickson
RIP

Eric, here's what's sad. First, there's only 7 comments so far on this post.

Secondly, we have TRILLIONS of dollars spend on F-35 airplanes that DO NOT WORK in many different ways. Our government is doing NOTHING about it because they're afraid it might bankrupt a manufacturer and put thousands out of work.

As I had mentioned in a post months ago, we could put EVERY high school graduate in the entire United States through college for just the cost of these planes. However, GET THIS, I'm not talking about FOUR YEARS. I'm talking TWENTY YEARS of college for every student.

I had a friend who owned a hunting store. They sold state hunting licenses and one employee kept stealing the cash from those licenses. In the end my friend had to pay back every penny or face jail time.

WELL, what about these son of a bitches who had their hands and or responsibility for this money. What about the billions of dollars that was mysteriously LOST when the Twin Towers came down???

IT NEEDS TO STOP.

But hearing the truth didn't make a lot of people feel all warm and fuzzy on the inside. They see the world through rose colored glasses. I'm just tired of all the BS from local and federal government. If I ran my business like the government runs itself. I'd be out of business in no time flat. It's like looking at your back account and it's $20,000 in the red and you say to yourself, "You know what? I'm going to go but that Corvette!" Not a single sane person would do that! Crazy!

Joe, no on cares any more. I hope Trump wins but I think she will do anything to win no matter what. for that reason with everything that has come to light and people still want her. what we need now is GOD.

911 remains a master plan ridden with obvious flaws. The master planners stood to gain TRILLIONS in profits, (although paid in blood money), for their skillful concept carried out like the climax of a suspenseful Hollywood movie. that masterful crime, what I call The Greatest Unsolved Crime of The Century, remains a magician's trick worthy of Satan himself.

Magically forgotten?
Two Trillion. Just like that.
Only a day before 911, on September 10, 2001,Donald Rumsfeld, Secretary of Defense, admitted, during the last peaceful day of terror-free living, that 2.3 trillion of Pentagon money was missing and unaccounted for. Imagine if you owned a bank and an investigation determined that you and your relatives had embezzled two trillion dollars from your bank. Newspapers blared:Two Trillion Missing." But-before the ink had dried on the tabloids, a nasty group of Islamofascists blew your bank up (or at least the records section) to smithereens. What a lucky break for you and your relatives. What an unlucky break for all those employees killed.But wait! In the following weeks, government inspectors (without investigating further) allowed your bank, encouraged your bank,to collect MORE funds!-500 billion more per year! to squander or spend however you felt.Because that is EXACTLY what happened in the 24 hours between the time Rumsfeld admitted the money went missing from the Pentagon and the 911 "terror" attack on the five-sided fortress.Flight 77,slammed through six walls (airplane parts indicate the latter), slammed into the newly remodeled Army financial management/audit area and the Army personnel offices, one of two main west section offices heavily destroyed in the Pentagon attack. The other section being the Naval Command Center.

And the ignorant keep cheering

And at this point what different does it make

Didn't Baltimore lose something like 50 mill when o'malley was in charge?

It was donated to the Clinton Foundation.

lock all Demoncrats up...We The People will need to affect the arrest...

I read Dave Lindorff's article about this and was appalled. 20 years without and audit, going back to 1997. In that time we've had 10 Congressional Sessions and other than the random protest from a Senator or Congressman (both D and R) No one was able to compel the Pentagon to do its duty according to the law... That's on Congress and particularly on those high ranking, long term, professional politicians such as those on the Defense Appropriation Committee.

This further shows they are all bought off. It's time to purge congress, White House, and judiciary of this corruption. Wake up people