The Reconquista Movement: Mexico’s Plan for the American Southwest 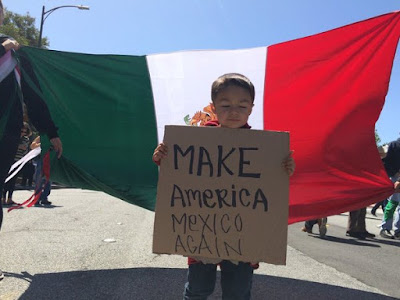 On January 7, 2006, the Minuteman Project held a National Day Laborer Site protest. Often, a day labor site is nothing more than a parking lot outside a building-materials store where the owner sees a business advantage to allowing illegal alien day laborers to stand around and wait for job offers.

At the day labor site in Rancho Cucamonga, the Minuteman Project videotaped an angry Mexican who came out into the street to shout insults. “Go back to Germany where you belong!” he shouted. “Stay in Germany! Get out of here!” Then, pointing demonstrably to the ground with his right index finger, he screamed, “This is Mexico! This is our land! Get out of here, racist pigs! Viva Saddam Hussein! Viva Cuba!”

Clearly, the illegal immigrants at the day labor center didn’t want to be identified, since they were planning to take jobs at below-minimum wages and not pay taxes. Yet, the claim that California is actually Mexico was not made lightly. For millions of Hispanics in the Unites States, and for millions more in Mexico, the assertion is made in deadly seriousness.

How will the Reconquista be accomplished?

this says it all,doesn't it???

My plan is F U we own it plan.

If not, there's a lot of 2A people out there to defend it.

They conveniently forget the Treaty of Guadalope Hidalgo. Their own ancestors sold part of Mexico to the US.

They seem to forget...if they somehow took the southwest states, the welfare gravy train would stop. Those states would revert to nothing but...Mexico. A third world country.

Don't the leftists spout that Mexicans."only come here looking for a better life"? it won't be a "better life" anymore... It will just be Mexico. Again.

And many of us whose ancestors arrived in the 1600s have Native Indian blood in us so some of our ancestors were already here too!

Do YOU own any of it?

Are YOU the same as the US Government?

Do you identify with this government?