Talk About A Load Of Crap 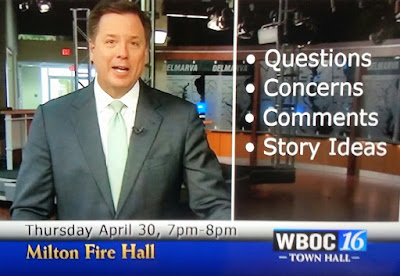 Earlier this year WBOC made numerous announcements trying to bring in the Eastern Shore residents together to tell them how you can make their station better.

However, NOTHING CHANGED! In fact, they're now broadcasting not only more northern Delaware news, they're now telling an incredible amount of really stupid national news as well.

They are very rarely covering local stories and quite frankly they conned their viewers into believing they care about what YOU think. Their DOOM & GLOOM story about Perdue yesterday was complete BS. Allow me to explain.

First of all, Perdue told everyone they were making this move 5 years ago. Secondly, NO ONE is losing their job. They're relocating from Salisbury to Delmar. No one needs to sell their home and believe me the Governor of Delaware wanted this facility much further north in Delaware. Perdue insisted they will only go so far as Delmar. This isn't professional journalism, it's shock value crap. They even said Salisbury will lose 200 jobs. Just where in the hell did they get that number? They certainly didn't speak to ANYONE at Perdue. They will relocate 97 employees and they hope to build that part of their business up to 140 employees in the future. WHERE DID THE 200 COME FROM?

Craig Jahelka, WBOC's General Manager needs to apologize to Perdue but more importantly the community for bold faced lies. They're not changing, they're getting a lot worse.
at 11/08/2015 06:00:00 AM

Nailed again JOE! WBOC is the worst News Station on the EASTERN SEABOARD. I enjoy reading about the CRIME WAVES in the 3 Del. Counties. Makes me feel safer in Wicomico Co. I keep telling everyone that DAN sent me.

For me, the coverage they are giving to a few unhappy residents of Backbone road, is far more damaging. Maybe the big poultry companies should reconsider spending their advertising dollars elsewhere.

Another business runs screaming out of Wicomico County!

WBOC news is tired and worn out with the same old format. Captain Willie reruns, sensationalized stories from far away states and stories slanted to their point of view.

I think they are stupid: to wit - their anchors will begin a new segment, tell you all about it (while the field reporter is looking at them on the background scree) and then turn it over to the same reporter after telling you all you need to know anyway. What's the point? Midshore Bureau chief, Dover bureau chief? what a load of crap. They love to give themselves awards, don' they. Every time we get a really good reporter/anchor like Karen Campbell, Jason Newton et al, they all move on to better things and we are stuck with Kenny Chesney's relative happily blinking his eyes over and over (watch Mike Chesney next time). Amateurs.

smart people will sell their homes and leave Maryland

They never question stupid democrat policies around here but go after businesses with all they got.

9:31 I tried. Oh how I tried but the rest of my family did not want to so I am stuck here. Its not worth breaking my family up over the issue but I envy those who can make the move.

Will they hire more sex offenders?

It is leaving Salisbury and replicating where is that a lie joe.?

9:59, Only a very small portion of Perdue is leaving Salisbury. WBOC continues, (even this morning) to say Salisbury will lose 200 jobs, that is a LIE. 97 jobs will be relocating a few miles up the road. They want it to look like 200 jobs to make Culver and Hogan look bad. Perdue committed to the move FIVE years ago under O'Malley and Pollitt. There's always an agenda with LIBERAL media outlets. They could correct their LIE but they refuse to do so. That's OK though, Salisbury News has a much bigger following and they'll read it here anyway.

So why not just state that it was a Pollitt omalley deal .

Heck I live in Salisbury and if it rains or wind blows hard their signal is gone. Really helps when bad weather comes and you should stay tuned. 47 comes in no matter what

I don't know of any news media that commits themselves to 85% coverage of Local news on the Shore. They all to busy broadcasting off the wall things. That is why I check in with SBYNEWS more and more even if they don't publish all my comments which fall well within Joe's requirements of comments to be published.

I have not watched WBOC News in years. They, like most of the MSM are controlled by Democrats. The Daily Times is just as bad.

I wish I could say the same about C. 47 reception. It's terrible
out our way, Mt Hermon Rd near K Mart. I enjoy 47 News much more
so then 16 but have to resort to it because of poor reception.

I hate both stations.

Dan the weatherman, I can't stand his so-called forecasts. It is always too hard to predict how the weather will be using his models. When a so-called professional starts his speech by telling me how hard something is, I know that person is usually not as good at the job at hand as they think they are. Case in point, he predicts very low if any rain, it rains all day long, he predicts cold, the weather is humid and warm. The poor soul looks like he is scared to death, he frightens me just watching him. I would much rather he told me the actual facts without all the fluff, and get it right the first time, all the time.
And, I still don't understand why they need three weather people, and sometimes four people, when Ms. Turner is used as weather reporter and news reporter. Obviously, anyone can do the weather, is't not rocket science.

4:51 - lol - especially the shot of the weather person looking at his computer before a commercial, pretending to be getting some sort of important, last minute bit of information. All they do is read the tape from the National Weather Service and try to base their graphics to match. what losers.

WBOC wants to look like a BIG market news station. That is one of the biggest problems, they are not big market and so they end up not being the small market news station they should be. It's like a person wearing size 3x clothes on a regular built body. It doesn't fit properly. It looks stupid but... stupid is stupid does!

Reference to comment regarding Maryland taking advantage of the poultry industry.

I should say so - when Senator Modeleno -(western shore left wing dem) - sponsors a 'Biddy Tax' to tax poultry growers per individual chicks - I too say that is going to far. My advise to Perdue - get the hell out of here ASAP. The Annapolis legislature is not only dangerous to your health - but to our individuals wealth.

I guess there were so many complaints about Dan that they did that hilarious commercial saying "Dan said it would be like this!" What a crock of crap! Sad but he said one night he had been doing the weather for thirty some years............and he still can't get it right! LOL

WBOC and WMDT are worthless!!!!

They announced tonight that their town hall meetings are back. Good job Joe. You have them on the run. They also did most of their news in PG county and Delaware tonight. You nailed it.