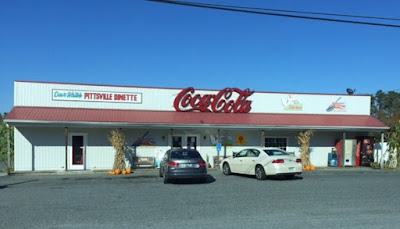 For $349,000.00 you can be the new owner of this exquisite Diner directly located on Old Ocean City Rd..

Thousands of cars per day drive right past this local restaurant to get to places like The Brick House, Going Nuts or so many other worth while dining experiences.

You never know what could become of this location with all new kitchen equipment, grease trap and a decent menu. Or, you can try to survive with what comes with the property and continue the legacy of a renowned reputation it's been accustom to over all these years.

Whoever goes for that deal is a fool. That business is dying off. The only people who go there are 70+ years old and are dying off. He doesn't offer food that young people like. Most young people won't eat muskrat.

Ha that's the most cars I've seen there in a long time!!

Good riddance! Maybe the new owners won't be so jealous when patrons go to other restaurants to eat from time to time. The owner is ridiculous. Prices keep going up and portions got smaller. He's nothing but greedy.

The elderly go there because they get a meal and a laxative all in one.

No wonder he's selling it. Nobody goes there anymore. Once he got caught taking the waitresses tips and paying them less than minimum wage people didn't want to patronize him anymore. If people find out there is a new owner and they change that nasty menu, they will start to go there again.

Hahahaha!!!!! True! The last time I went there the peas and dumplings were so greasy I barely made it home.

That food is like poison to me. Nasty and greasy. Anyone who eats there regularly has to have cholesterol that's off the chart. It's like a truck stop.

You're so right! Thousands of people drive by everyday to go to other restaurants. And he just sits there in his rocking chair watching them go by. When Weezy was cooking there more people came in. People came in to see the employees. Not Dave!

7:51 shows how uneducated you are. I have been to some truck stops and their food was awesome.

I could never stand the Pee Wee NASCAR playhouse environment.

I can't say anything about Dave, because I don't know him, but I did eat there once and only once. It was awful and expensive. Very rarely does food from a restaurant gross me out, but it did that day.

Anonymous Anonymous said...
That food is like poison to me. Nasty and greasy. Anyone who eats there regularly has to have cholesterol that's off the chart. It's like a truck stop.

looks like you haven't been to a truck stop lately, and I don't mean that dive in Laurel. truck stops are state of the art now.

I would never patronize him or his establishment. He's s greedy little man who has contributed NOTHING to his community. He constantly cries about how little money he has and the builds a huge house that he lives in with his girlfriend. No way they can use a house that big. He thinks he is like a God to his employees and treats them like dirt. Yes he got caught paying his waitresses less than minimum wage and had the give the their back pay to keep them from filing a complaint with the government.

We used to go there once in awhile. I didn't have a problem with the food but the service was lacking. Once we sat for 20 minutes in the 1/2 filled restaurant and no one paid any attention to us so we left and never stepped foot in the place again. This wasn't the first time we felt the service was horrible.
Ironically yesterday we stopped in Jimmy's in Bridgeville for a late lunch. Place was crowed for an off time and the staff was Happy Happy Happy which made for a great experience.

I don't know if the sale price of Dave's Restaurant is fair or foul, I'm not a Real Estate Agent. At one time Dave's was very popular in this area, the Pee Wee Nascar theme was due to two of his sons working on Nascar Teams and Daves love of the Sport, and the availability of collecting original Nascar memrobilia. He himself was a very popular local dirt track stock car driver back in the day.Nobody seems to have mentioned his Coca Cola Collection. Whether or not you liked the food is immaterial at this point, the business is being sold and maybe the new owners will have a something everyone will enjoy. The remarks made on this post regarding the Senior Citizens are totally uncalled for, you people who made them should be ashamed of yourselves. They deserve respect, what age are you going to be in 50+ years?

We ate there one day. It was our first time there. Turns out they don't accept any form of Credit/Debit cards. Luckily we had some cash on us but most of the time we pay directly with our card.

How cheap do you have to be to not want to pay to have some sort of card service for your business ? What business these days don't accept cards besides this one ?

Going Nuts is also for sale last i saw. For about the same price. but not with a building.

In 50 years I'll be 112. Daves food isn't good for you no matter what age you are. If I stay away from there I may live to be that old.

I'm 39 and I eat there at least three times a week with no complaints. Now......off to my bypass surgery. Wish me luck.

The Pittsville dinette is a perfect example of the low standards of the Wicomico county health department. Here in Worcester county that place would have probably been shut down

8:50 I see your very attentive in your understanding of what was written. The comment about REMARKS made about Senior Citizens had nothing to do with what they eat or where....

Cash can be easily hidden. Especially in the restaurant industry. Why do you think pizzerias are the establishments used most by the mafia to launder money? I'll bet Dave white has a large cache of cash hidden in his house somewhere or on one of his farms. Tax evasion is a crime Mr White. It would be interesting to see the results of an IRS audit.

I would think tax evasion is the likely reason.

Dave is aging and should sell and enjoy the rest of his life.

I think it would be a great Crab Shack. All you can eat crabs chicken or shrimp.

When I look at Dave white I think of the Pittsville version of Don Corleone.

They have the biggest flies on the planet!!! I saw a ketchup bottle go flying by my table one time when I was in there!! It certainly isnt the cleanest place thats for sure.

It is sad that for a long time the Pittsville diner was the only game in town. Now that other places have opened up and take some of Dave Whites business away he has become a bitter old man. When I go to the Brick House I see some of the people who used to go to his place but now go to a place that offers a different variety.

Being a senior citizen I took no offense to comments made about them. I know I have to think about what I eat if I want to live a long and healthy life. Many seniors either don't know or don't care that how they eat has an affect on these things. Eating greasy foods makes you fat and unhealthy. My opinion and I'm entitled to it. And actually being "old" is a state of mind. I'm never getting old.

9:04 said:
"I'll bet Dave white has a large cache of cash hidden in his house somewhere or on one of his farms. Tax evasion is a crime Mr White. It would be interesting to see the results of an IRS audit".

9:59, Dear Hitler, Why do you people feel that others do not have their right to their First Amendment? Do I agree with the comment, NO. However, do I agree with your ANONYMOUS comment as well, NO. Yet it too was published. Might I remind you that this is AMERICA.

Either way. Good or bad. Dining like this place is going out of style. people are so much more health focused now. i'd never think of eating at a place like this dinette, or daytons, chinese maybe once a year, but it's so full of sodium...... if i go, it's somewhere i can get something at least somewhat healthy.
heck, i've avoided pizza (cholesterol) over 13 years now. and gave up caffine/soda (sugar) 16 years ago, and haven't had an "adult beverage" in 21 years. resturants hate it when you get water, believe me.
Strictly bottled water or tap if i'm out, and milk are all i drink. White meats and fish. Broiled and baked. really watch the diet.
My only real vices are subway and chick filet. i'd never consider a mcdonalds or hardee, etc. unless i become financially unable to do otherwise.
with all that said, i could have a heart attack or get hit by a car tonight. you never know.

lol...people, name me one non-fast food restaurant that pays