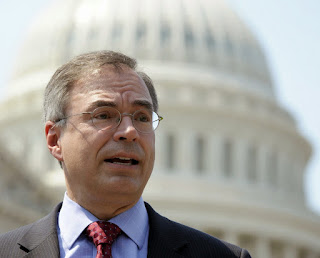 WASHINGTON, DC: Congressman Andy Harris (MD-01) released the following statement after voting in favor of House Resolution 411, the “Finding that the President has not complied with section 2 of the Iran Nuclear Agreement Review Act of 2015.” Recently, Congress learned that President Obama made two secret side deals within the nuclear deal with Iran that were not originally disclosed.

"the truth?" Obama supporters and democrats in general haven't a clue how to tell the truth and obama himself is the poster child for pathological lying.

Not that we the People have been privy to any of the details, but he also needs to explain why no American Inspectors would be allowed there as well.

I agree with Harris but what is he doing about the situation? Has he joined Ted Cruz and others in Congress to actually stop this horrible deal? It can be stopped if the republicans actually want to stop it.

It's fine to make a statement but has he told the speaker to stop this deal? The deal can be stopped because Obama didn't notify congress of all the details of the deal. Harris needs to put pressure on the speaker to kill this horrible deal, not just make statements about it.

Representative Gohmert from Texas presented the only correct way for this agreement to be treated by the legislators....

According to the Constitution (as he related) two-thirds of the Senate (only) is required to approve treaties. If the Senate (which the Republicans are in charge of now) votes on this treaty and less than two-thirds vote yes - the US is NOT bound by the agreement being foisted upon us by the treasonous pair Obama and Kerry.

Anything less than that and the Republicans (RINO's) are complicit in this agreement!

Thats the problem with party politicians - all talk and no action!

10:08 says, "Not that we the People have been privy to any of the details"

This deal appears on quite a few different congresspersons internet sites. I am glad there continue to be some responsible people in Washington who will be able to see this deal get approved.

Ok, lunch time, look, RNC is all like- we need to get control of congress, ok done, well, umm, so, what we really need is uuhhh, well, we need control of senate, done , uuhhh, drool, piss pants when asked a hard question by the press, well, we, aahh, what we really need is uh, uummm, the Presidency, yeah that's the ticket, Look NO, f that, I'm done, you congressional limp wristed lobotomized balless estrogen laden scumbags can't even use the constitution to your advantage to beat a guy who wears short pants and a bicycle helmet on vacation. Responsible? Boehner is compromised- period. Harris supports Boehner? Well, does he? I think so. Repeal Obamcare you sissies say, yay!! Well, repeal and replace, yay!!!! Well, fix Obamacare...uuuhhh, hey wait says Andy's aides and Andy, I might lose my non Obmamcare medical insurance. These fools voted to give Obama more power. WHY? Benghazi, joke of a hearing, tough talk no action, republican EUNUCHS!! Most likely neutered by the NSA? If not then why ate they scared of their own shadow, and they wonder why some asshat like trump beats out Hillary (I should be in a prison orange) Clinton, is Permanent wave hairboy an act? Sure, but at least the gerbil headed flip flopper is saying some things that need to be said, meanwhile the Republican eunuchs can't stop water from flowing down a drain with a flashlight and two hands. Time after time after time from fast and furious to IRS Lerner to, where do I stop? You morons have been handed everything anyone needs, and what have you accomplished? Exactly Jack and chicken scratch. So help me I swear to every one of you toothless balless narcissicic ( did I spell that right) purile whitless con men I WILL pull the lever for the worthless drama queen gerbil headed liberal in conservative drag Trump if you screaming f tards don't get your stuff together and lead the country out of this mess. For Pete's sake Andy!!! Its 9-11, you guys are actually going to let 10,000 syrian Muslim males into this country, STOP committing, aiding and abetting the countries demise otherwise known as suicide by immigration. What the flaming hell is wrong with you people, I expect this stupidity by the dems but please by all that is Holy stop the insanity and lead! Whew, I feel better, need to smoke a cigarette

Too busy worrying about marijuana in the district. Which was a huge waste or time and effort.