'Self-pity Is Our Worst Enemy' 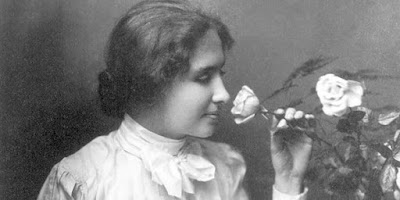 Helen Keller was born June 27, 1880. At the age of two she suffered an illness that left her blind and deaf. Her parents took her to Dr. Alexander Graham Bell who recommended the Perkins Institute for the Blind in Boston.

It was there, at age of 7, that Helen Keller was taught by Anne Sullivan through the sense of touch. Anne eventually taught Helen to read Braille. Helen Keller began attending Radcliffe College, where Anne Sullivan interpreted the lectures.

Helen became concerned about all the blind, especially those blinded in World War I or by poor working conditions. Though naive in her political views, she received numerous international honors for her efforts to help the blind.

Helen Keller learned to type on a Braille typewriter and wrote many books between 1903 and 1941, including:

Helen Keller stated: “I thank God for my handicaps, for, through them, I have found myself, my work, and my God.”

In the film documentary of her life, “The Unconquered,” Helen Keller responded to the question, “Can you see the world?”: “I can see, and that is why I can be so happy, in what you call the dark, but which to me is golden. I can see a God-made world, not a man-made world.”

When I attended school (back in the day) the story of Helen Keller was highly recommended reading. These and other books like this is what made our generation strong and positive.

Most people don't realize that she was a registered communist!

It used to be that dwelling on something wasn't promoted and you were taught to accept and do better because of what you felt was a disadvantage or an injustice. People were better for it and society as a whole was more civil and polite.
Now a days it's promoted to dwell on something. It's made for a very hostile society which creates all the crime we now have.

That would be perfect! A handicapped communist on the $50 bill

12:59, I wouldn't want a communist on the $50 bill either. But for you to include handicapped in your statement shows how ignorant and thoughtless you are.

How about That's perfect! A differently abled communist on the new $50 bill?

Who f-ing care. She was a remarkable women who contributed something great to help all who are blind. What great thing that helps all people have you done?