Ireton Freaks Out Over Blogs In Press Conference 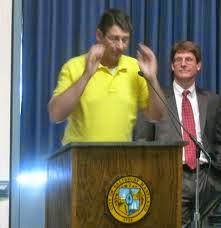 When Jim Ireton held a press conference the other day, he went on the attack over Blogs and to be fair the rest of the Press as well.

He was upset because of the way we, (Blogs) handled the alleged drowning in the river.

Because I refuse to give this childish, immature, flamboyant mayor ANY attention at his LOOK AT ME press conferences, I refused to attend. HOWEVER, if I had gone I would have immediately stood up and said, (hypothetically) Jimmy, what if I were to chase you on the top floor of the parking garage and watch you jump to the ground. IF you happen to die, no crime, right? I mean, you voluntarily jumped, right?

In one way, shape or form, there was s a crime here and I firmly believe the majority of the public see you and the Police Chief as people who will do ANYTHING to make sure serious crime is no longer reported in Salisbury.


I also believe there should be criminal charges. Such as, 1st degree murder, 2nd degree murder, manslaughter, something. The you man was obviously in fear for his life, so much so he ran into a river knowing he cannot swim.

Finally, what a HORRIBLE way to go! Think about it Jimmy, his very WORST FEAR is the way this young man died. Well, if you don't like my opinion on this matter, go pound sand. You stood up in front of a very small and select group of people and cried like a little girl and the press refused to air it.

Well, I think you deserve the attention from us so called nasty Blogs. You, (as a Liberal) only want press out there that agrees with the sick and twisted Liberal views and beliefs. If ANYONE out there doesn't support your personal lifestyle, we're Homophobes. If we disagree with Obama, we're Racists.

I guess more than half of the county is Homophobic racists OK jim then i will live with that like you can live with being the biggest anti American Anti heterosexual Asshole in MD.

The mayor and police chief have an agenda and their sticking to it.

I haven't heard any autopsy results yet.Presumably not released yet,but potentially revealing because he was in the water for a very brief time.Any drug or projectile that could possibly have been involved would still be intact and in the body.Thus far it appears that he feared for his life and jumped overboard..

Mary Ashanti where are you. said...

Commin sence i say but where is the NAACP ?

i usually don't attend 3rd friday but i'll be there tonight! i wonder how jimmy is going to conduct himself tonight with bob culver and larry hogan walking around! fly on the wall

2:28 Beating the bushes trying to find "hate crimes" that fit their agenda, and looking hard for anything they can call "racism".

What, you thought black lives actually mattered to them?

2:40 - look for Ireton to act like a bossy, arrogant jerk. The great thing about Hogan is he reads people very well. I'm sure he knows what Jimmy is all about and has been well briefed on his antics and philosophy. As for the citizens who voted for Jimmy, you all should be embarrassed.

Joe, you r just as bad w/ ur one sided for the republican opinion.

Joe should be down there getting pics.

It was murder any way you look at it. He is living his lie that he and Jake Day are making believe that crime is down in Salisbury. God forbid we call a young mans death a murder even though it was.

Thank you Jimmy for lying about a murder in Salisbury when we actually had a MURDER in Salisbury. I was recently talking to the States Attorney and he is fed up with your shit and the crime infested city that is the smelly crotch of the Eastern Shore!!

Crime is not down, it is the highest it has ever been. The fact of the matter is that there are not enough police officers on the street because we have to fund unneeded paid fireman and build a new 6 million dollar fire house in a GHETTO!! Trade the paid firemen in for new police officers!!

CRIME IS NOT DOWN!

Thanks for fighting A-Holes !
Not many fighters left around Salisbury. The truth really hurts that man.
I can't imagine him teaching young kids , parents beware!

This Bozo made a comment on Jim Ireton's Facebook page and he has no clue what he is talking about. Not only that, but this Bozo doesn't even live in the City of Salisbury or even in Maryland. This Bozo is defending Jim Ireton on his plan to stop the fire department from responding in the County. This Bozo has all his facts wrong and he is defending the Homo Mayor!! Guess what Eric J. Dawson you mention diesel fuel costs rising and wear and tear on fire trucks. Did you know that Rick Hoppes Sent out a memo sometime ago telling all fire officers that they had to respond on all ambulance calls that were chest pain and difficulty breathing type calls. The list was endless and they pretty much had to respond with a fire truck on every ambulance call as a medical assist. Guess what Mr. Eric J. Dawson did you know that the fire engines with their crews are not needed on most every ambulance call they respond on! Look him up on FB Eric J. Dawson, he doesn't even live in Maryland!!

Eric J. Dawson - I don't think the Mayor is out to risk property or life over money but I think he is as he should looking at this in long term perspective. The city is a business and a business can only operate if its getting paid for services rendered no business would stay open and continue to not get paid. If you add up what the city is loosing per year and look at it over five, ten or even 15 years that's a lot of money lost by the city. Operation cost continue to rise, diesel fuel cost, wear and tear on equipment, aging equipment that will need to be replaced, gear replacement, training all these things have to be considered and the money has to come from somewhere. The Mayor has to keep the best interest of the city his number one priority and loosing millions a year is not in the best interest of the city. I'm sure given time he and the fire chief will come up with a solution to continue to provide protection and at the same time recoup the operational cost. No one wants to see anyone get hurt or their house burn to the ground and I know to many it seems that the Mayor is choosing money over life safety when in reality he's not he's making sure the fire departments get paid for services rendered so they can continue to operate.
-----

He will probably throw a hissy fit & try to interject his libtarded agenda to the gov at some point count on it. Either way an embarasment to the shore. Cant wait to see this ignorant fool out to pasture and all his comrades

As a former little girl, the comparison is embarrassing! LMAO!

I think Jim Ireton has some good accomplishments , like ah , ah ,ah
wait I'm still thinking. Anyway he has done some remarkable things , ah , oh yeh , he got mad and had a tantrum.
Teacher teacher I declare , I can see your underwear.

Ireton should be thanking the governor for taking the time to come to 3rd Friday, but he won't because the governor is republican.

Just for clarity, can a legal scholar render an opinion as to the drowning situation --- was there a crime? I seem to recall an incident reported in Florida in which someone died as a result of being chased, then falling to their death.. there was a charge...

Keep the Fire Dept. in the City &
surrounding 5 mile areas only, ,
cut out more then 1/2 of them.
Have volunteer firefighters for
the rest of the County as
Pittsville, Powellville, & all the
rest of the volunteers will help
.
The Fire Dept. here has to many
people----City paying them waaaaaaaaay to much money!!!!
Things have got to change in that
Dept. or they are going to nickle & dime the citizens to death!!!

Said it before and will say it again...there are many areas with larger populations and bigger cities that have all volunteer fire departments. Do away with the paid fire department!

And ireton is a fn idiit no pride.

Baba-Booey Baba Booey. Every press conference he has someone should just say this. Sooner or later he will either quit having them or he will go nuts. Either way public wins.

It's too bad the sorry a $$ homo can't handle criticism of his inept administration and pathetic behavior. Too bad he can't handle reality. Get over it drama queen. You suck..in more ways than one

When voters demand leadership instead of drama, there might be a change.

It's too bad the sorry a $$ homo can't handle criticism of his inept administration and pathetic behavior. Too bad he can't handle reality. Get over it drama queen. You suck..in more ways than one

A friend of mine that lives in the city needed an ambulance over a year ago and he was charged $600? Believe they came from station 2, that's the one on Beaglin Park right?

I believe that freedom of the press was put into the bill of rights for just this reason.

You have a mayor that believes you only have that right if you play by his rules. Publicly criticizing any media outlet in the way Ireton did shows a complete lack of understanding in what can and should be published. Making sure that there is a reliable source of information that has the freedom to expose government actions without repercussions.

Ireton is amongst the liberal crowd that believes freedom of speech is being free to agree with them.

8:51, station 1 is the one on beaglin park. Insurance covers the ambulance bill unless they decide that the person did not truly need an ambulance in which case the person gets the bill.

Not the case 8:15, he spent 9 days in ICU, he didn't have insurance but his house is in Salisbury city limits and pays taxes.

The Maryland State Police investigation division is, at the request of the Salisbury Police Department, investigating the death. MSP has more and better resources to investigate a crime of this nature than do either SPD or WCSD. Using MSP's professionals also has the advantage of not costing the city any money.

Once the investigation is completed, the charges, if any, and the details will be publicized.