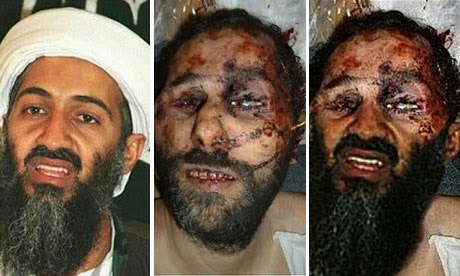 An image apparently showing a dead Osama bin Laden broadcast on Pakistani television and picked up by British newspaper websites is a fake.

The bloodied image of a man with matted hair and a blank, half-opened eye has been circulating on the internet for the past two years. It was used on the front pages of the Mail, Times, Telegraph, Sun and Mirror websites, though swiftly removed after the fake was exposed on Twitter.

It appears the fake picture was initially published by the Middle East online newspaper themedialine.org on 29 April 2009, with a warning from the editor that it was "unable to ascertain whether the photo is genuine or not".

The person in the photo appeared healthy. Guess who wasn't in good health?

I don't believe bin laden is dead. I think it was an election ploy and the Libtards fell for it hook, line, and sinker. Right Chuck Cook!!

Maybe that's the REAL reason why the Pakistani doctor is still in jail.

At this point, what does it matter?
And I'm really not trying to mock Hilarious here, but isn't Bin Laden no longer relevant in the overall picture?Even if he's still directing terror from his compound, are we more threatened or less? There's certainly no shortage of middle east morons pissed off by our constant need to keep our military industrial complexes well funded to plan an endless supply of terroristic actions that match or exceed our own. And there's no shortage of excuses to fiught wars over there whether the "enemy" needs it or not!

Hey, Syria just came up as the next question now that "we" decided to pull out of Afghanistan and wherever else. Gads, we need somewhere else to go, for Chris'sake!

Of course, in order to keep these fires burning, somehow we need to keep our own borders open to all the "invading forces" so that we may get to have the war "brought home", so as to cut down on all that "travel time". I mean, shipping all those tanks and planes halfway around the world is expensive, dude!

If we just fight them over here, it would be a real money saver, especially if we just let them win so as to not destroy any of our infrastructure, and everybody still gets to use it,

I guess that would be okay.

Are we all on board with "DAT"?

Picture on the right is a doctored version of the one on the left. Just look at the mouth to tell.

What's up with the middle picture, can't tell, but facial features do not add up, even accounting for disfigurement.

Then elements from #2 and #3 are shared.

Looks like the nose is not the same and the beard in the pics aren't the same either .

6:42 what matters is that we have been lied to yet again. When will the b.s. stop?