When over the weekend, a Xerox "glitch" shut down the EBT system, better known as foodstamps, for nearly the entire day across 17 states leaving millions without "funding" to pay for food leading to dramatic examples of the basest human behavior possible, some of the more conspiratorial elements saw this merely as a dress rehearsal for what may be coming in the immediate future. While there was no basis to believe that is the case, a USDA (the currently shuttered agency that administers the Supplemental Nutrition Assistance Program) memo obtained by the Crossroads Urban Center in Utah carries in it a very disturbing warning for the 46+ million Americans currently on foodstamps.

To wit: "understanding the operational issues and constraints that States face, and in the interest of preserving maximum flexibility, we are directing States to hold their November issuance files and delay transmission to State electronic benefit transfer (EBT) vendors until further notice." In other words, as Fox13News summarizes, "States across the country are being told to stop the supplemental nutrition assistance program for the month of November, pending further notice."

The full memo first posted on the Crossroads Facebook page is shown below: 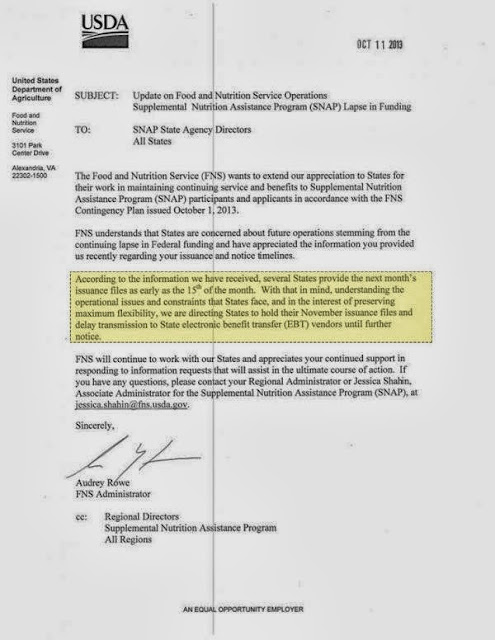 "Prepare for ludicrous riots"!
A portion of the EBT user community has already threatened riots.

Might actually be a good time to shut it down and see who survives! Bring back natural selection and reduce the population.

Let this be a lesson to sponges. Sponges are nothing more than slaves who for the most part grew their own putrid lot in life by being stupid. For instance, if a lot of single mothers would have had the brains to not sleep with a loser who didn't have a pot to take a leak in they wouldn't be dependent on the government.

Retailers will see a 20% drop in sales. Food banks will be emptied in a week. What then?

If you guys can curb your hate for a couple of minutes, and think WHY obama is doing this and the result that will surely happen, you might get a glimpse of the bigger picture.

Things are being manipulated in certain ways to get the results he desires.

I'm not a very smart guy, but even I can see what's going on in D.C., the country and around me.

So far everything has been peaceful and more or less organized. With the park rangers and a few police being the aggressors.

It will not always be this way. When or how things will explode I do not know. But I know it WILL happen.

Prepare yourselves the best you can and keep your eyes and ears open.

I am not a conspiracy theorist, I don't wear a tin foil hat and I'm not trying to be a doom sayer.

But things are going to deteriorate very quickly. He/they are moving it closer to the edge in increments.

It is coming, why else would so many government offices and other branches of the government need millions of rounds of ammunition? They are getting prepared, are you?

I feel the same way as you do. What you see here is one little piece of a big puzzles.

What did Jesus say about feeding the poor?

The retailers need plenty of advanced notice in the form of printed signs and media coverage.Stop calling it a glitch and own up to presidential failure.Post signs everywhere in the stores and beef up security.This had to happen and better now than later.

11:31-In short Jesus preached extending mercy but not enabling. He extended warnings such as "Behold, thou art made whole: sin no more, lest a worse thing come unto thee.” A line was drawn when the person he helped remained in sin. When we help someone, we do it with Faith that the good work will produce good fruit. If it produces bad fruit the work is not of God and we should move on.

If you all are so excited about seeing hungry and desperate black people there is no need to wait around here with your fingers crossed hoping for collapse; book a vacation to Haiti or Somalia. You can get your fill of others suffering there

wth- 12:58-
Did anyone say anything about Haiti or Somalia? Are those places in the USA? Grow up. BTW there is plenty of white people on EBT too.

Survival of the fittest. Simple as that.

12:58,If people are so stupid to keep on reproducing when they can't afford it then the herd needs to be culled-PERIOD! YOu don't bring a child into an already miserable existence.
This was Margaret Sanger's philosophy and why she created Planned Parenthood.
These people do nothing productive anyway and are worthless. Oh I take that back-they create jobs in the form of police, prison guards.

churches, neighbors, extended families, charitable organizations, friends and more are supposed to temporarily step in when needed. the government is NOT supposed to tax us to death in order to waste this money on agencies that are fraudulent, overstaffed and corrupt to dole out hard earned money out to those who don't feel like working and only as the government see fit.

that's again why Jesus said we who are closest to the situation should help those in need. this way it's less likely corruption will take place.

is this clear? do you get this? I sure hope so, because it's wisdom from God seasoned with common sense.

truth - what a concept.

We seem to forget that humans are still animals.