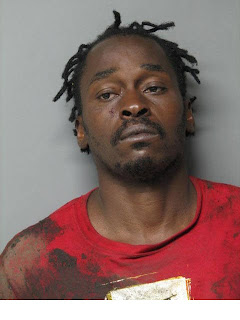 Resume:
Dover, DE- The Delaware State Police have arrested a Philadelphia man after he assaulted a trooper in an attempt to flee from custody.

Troopers were called to the 2000 block of Chestnut Grove Road around 9:40 a.m. Thursday after a 47 year old victim reported a suspicious subject on his property. The victim told the suspect, who was later identified at Hughie Cooper, to leave his property and Cooper did. A description of Cooper was given to the 9-1-1 Emergency Communications Center and was broadcast to responding troopers.

As a female trooper was traveling on Kenton Road in the area of Chestnut Grove Road, she observed an individual that matched the description given by dispatchers. Once Cooper saw the patrol car, he immediately started running towards the area of Maple Dale Golf Course. The female trooper exited her vehicle and initiated a foot pursuit with Cooper, giving several commands for him to stop. The chase continued into a wooded area where the trooper observed the suspect lying on his back with his hands balled up underneath a shirt across his chest. As she gave numerous commands for him to show his hands, he failed to comply which resulted in her deploying her departmentally issued Taser, briefly subduing the suspect. A struggle ensued between the two and in the process, Cooper was able to take control of the Taser and turn it onto the trooper causing her to receive a slight electric charge but not incapacitating. The trooper was able to quickly break free from altercation and restrain Cooper, placing her handcuffs on him.

Cooper was then transported back to Troop 3 and arrested for the above listed charges. He was arraigned at JP2 and committed to JTVCC in Smyrna on $10,500.00 cash bail. Cooper was initially transported to Kent General Hospital where he was seen for an unspecified injury before being turned over to Department of Corrections.

The trooper was taken to Kent General Hospital where she was treated for an unspecified injury she sustained in the altercation with Cooper. She was later released.
at 8/10/2012 04:36:00 PM

You bet and is sooooo purty.

She sounds like a real badass.My kind of woman.

I agree with 6:41. She should have shot him and done us all a favor.

got his butt kicked by a WOMAN? gonna have fun with you in lockup girly man.

She was able to gain control when back up arrived.