Chart Of The Day: From Pervasive Cheap Credit To Hyperinflation

The topic of the student loan bubble is not new: having crossed $1 trillion recently, student debt is now the biggest consumer debt category, greater even than US credit card debt. We have extensively discussed the implications of the parabolic curve representing outstanding student debt before, and it is no surprise that the issue of student loans has become of one of the key topics of debate in the ongoing presidential mudslinging campaign. As is also known, an increasing portion of student debt is funded by the government at an ever lower rate of interest: after all it is critical to allow the bubble to keep growing with as little interest expense diverting the stream of cash from the end borrower - wide eyed students who increasingly realize they are stuck with tens of thousands in loans and no jobs available to allow them to repay this debt, in effect making an entire generation debt slaves. Finally, as should be known, student debt is non-dischargeable, meaning once a person becomes indentured, they are so for life, and filing bankruptcy will do nothing to resolve debt claims against the individual. After all there is no other collateral by definition that can be confiscated by the creditor - the only thing the debtor "acquires" in exchange for this debt is a skillset, which sadly in the New Normal is increasingly redundant. But there has always been one question outstanding: just what does all this easily accessible and now pervasive student debt fund? The chart below, courtesy of Bloomberg, provides the answer: in the past 3 decades there has been no other cost that comes even remotely close to matching the near hyperinflationary surge in college tuition and costs. 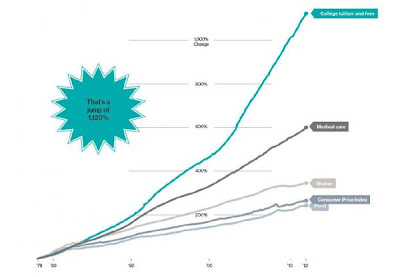