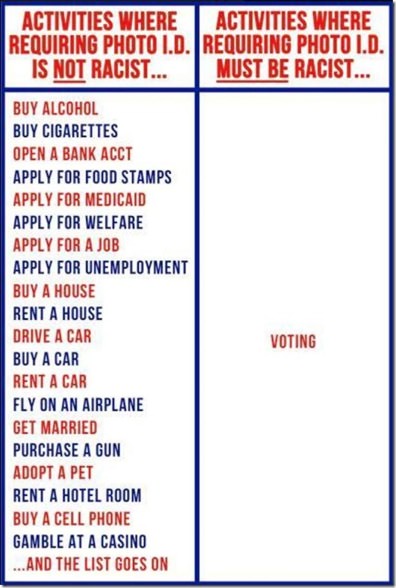 I am surprised applying for welfare required ID, years ago I rented to some section 8 people and you would not believe all of the programs and what people get away with. Some people collecting in three names. Sad

So true. Change of subject (sort of). Did anyone see on the website an article about Michelle' new book Talk about a racist. She stated that it is always hard for a black person to be a first such as President. Stated that people never even heard of black man and what they talk like. Really! Mentioned that the way Trump talked about her husband she feared for her life and that of her girls. That some crazy person would come to DC to harm hem. Doesn't every President and family fear the same? Trump's reply so to speak was she should have feared the lack of military that her husband destroye that not only made it unsafe for her but for all of us. So true. I for one will not buy her book. She is a disgrace to our country. There wasn't anything this black woman in the White House did not take advantage off. So pampered. The article also shows a picture of the Obamas on the campaign trail. She looked like a scrub woman. Look at her now. Amazing what money can buy. I am so sick of hearing about her and Obama. They will fade as soon as the Dems find another super star. But not fast enough.

Duh ... Lib Dumbocraps = a lot of gall. Republicans no brain matter for letting the crap get away with it

WE better hope she fades a lot of those idiots love her.

You know, this whole racist "thing" is getting kind of old too. Look at the gubernatorial races in Florida and Georgia. The dems are losing so get out the race card (this even after the Florida candidate conceded). Time these people put on some grown up pants; after all Obama was elected; oh...wait...look what a mess he made.

7:30 Why anyone would even buy her book is the mystery? She is nothing but a slave to a man. She is a liar who lies without any guilt. She is all that is wrong in black communities. The unfortunate thing is blacks in general because they have become such an immoral race still idolize the obamaa. What does this show their youth. That is okay to be a dishonest immoral person. Then they act like it's such a mystery why all the black on black murders. When honesty is not valued in a society that society becomes chaotic. They will never admit this though because most are brainwashed too and can't think for themselves so when they are told all their troubles are because of racism they being good chained up brain dead slaves to the democrat race baiters repeat the lies. If they did have any morals they would be ashamed at how low they have become.

Right she did take advantage of tax payers while in the white house. You can take them out of the ghetto but you can never take it out of them. Lying and spending other people's money foolishly is what the obamas did best.
even as parents the are failures. One of what they spawned was caught on camera once wearing a shirt with one of those mumbo jumbo sounding people who talks violence on LE. So typical they know how to hump and make those babies but as parents animals do a better job.

I can not relate to even one (1) vote being misrepresented and I don't care if it is republican or damnocrat. Each vote should be cast legally (by a person legal to vote). The total should be just that, the number of votes cast. Also, how do boxes of ballots be found later when they should NOT have been lost. If there are absentee ballots, etc. the time frame should be so they are there on election day and counted. There is time to have them in and counted.These voters know ahead of time who is running and what the will vote on. Do it and have it in, they have early voting don't they? You can clearly see voter fraud and nothing being done about it except talking heads explaining nothing to us. I am disheartened with the way our country is being made to look like the dumb asses we are. I have faith it will one day be corrected but not in my time.

Lol, I had so much to say with regards toward our current First Lady to contradict your post, but I had to laugh at myself cause your comments weren’t worth the energy.

Who dat said who dat 9:08. I had to laugh at your post. You do realize there are several post above. Or are you speaking just resistance being you don't have nothing to say about our beautiful, intelligent, etc. First Lady. What a breath of fresh air from what sucked out of our trough for the previous eight years.

The entire premise here is flawed. Not a single thing listed in the left column is a Constitutional, "God Given" as it were, right.

In the right column is "voting", and it is a Constitutional, "God Given", right.

It is not "racist" to want voting ID's, but it DOES make it more difficult for poorer citizens to vote.

I am not convinced that there is rampant voter fraud, but a voter ID might make people more comfortable. As long as the ID's were free, and the cost of acquiring the ID's was zero... then I see no problems...

But if there is a cost involved in obtaining the ID, a solid argument can be made that it is blocking citizens from exercising their right, God Given.

Dave T: Thank you for posting this. Maybe we should get another version as a billboard with neon letters and flashing lights so people can finally realize the difference between what's right and wrong. Seems like society is having trouble differentiating these days. They elect liars instead of leaders, then wonder why things are a mess.