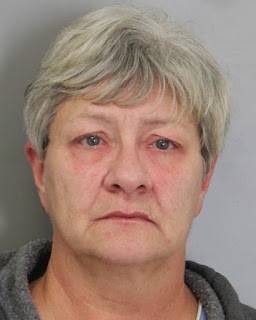 Lewes– The Delaware State Police arrested a Seaford Woman after she struck her boyfriend with her vehicle.
The incident occurred at approximately 6:57 p.m., on Tuesday, October 16, 2018, when Troopers were dispatched to the 35000 block of  North Drive, West Bay Park for a report of a domestic.  Upon arrival, Troopers located a 48-year-old male laying on the ground who advised that his leg had been run over by a vehicle.
Further investigation revealed that the victim, and his girlfriend, 59-year-old Jacquelyn S. Peruchi had engaged in a verbal argument earlier in the evening.  The argument continued when Peruchi entered her vehicle, put it in reverse and struck the victim who was standing outside.
The victim was transported to the Beebe Medical Center where he was treated with non-life threatening injuries.
Peruchi was taken into custody and transported back to Troop 7 where she was charged with the following:
Peruchi was arraigned before the Justice of the Peace Court 2 and committed to the Delores J. Baylor Women’s Correctional Institution on $23,001.00 secured bond.
at 10/19/2018 11:00:00 AM

Rosie O calling for a military coup on Trump.

Went to Beebe...he's lucky to be alive.

She is supposed to be in Canada.

Well she's too old for the PMS defense.