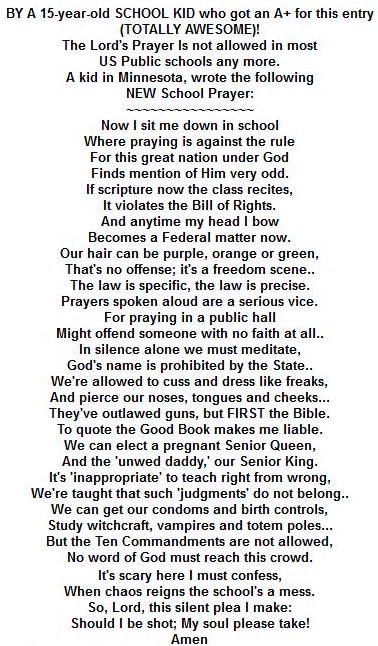 That is a wonderful way to pray, so sad what people have done to God and religion as a whole.

Anyone, at any time, can pray in school. "God" or the Bible are not prohibited AT ALL.

What you can't do is force people into compulsory participation in a religious activity. Administrators can't use their position to proscelytize.

Nearly everything asserted his is just plain false.

Imagine, for a moment, someone forcing YOUR children to participate in a religious activity you don't approve of?

We are sending our children to get an education, not for a religious revival. If I want to do that I'll take them to church, send them to vacation bible school, OR send them to a private school that caters to my religious preference.

To keep it simple, you couldn't go see a movie, and then midway through stand up and start praying aloud and declare that everyone join. That is not you exercising your religious liberty, that is you being rude and inappropriate AND disrespectful of others.

It a school setting doing the same is equally if not a more egregiously inappropriate and disrespectful action because now it's not being imposed on adults, but on their children with out their parents consent.

But lets be clear, no one can stop you from praying or reading the bible in school, and to say otherwise is just not true.

Your hypersensitivity about God and your neurotic compulsion to lecture the rest of us about the evils of mentioning His name in public or even LOOKING AT a symbol associated with Him is getting tiresome.
Yes, there has been some pretty whack stuff going on in schools. You should absolutely know that.
Of course, I'm talking to someone who gets a cold chill and suffers anxiety attacks if they see a cross on a mountain 10 miles away on their way to Arizona.
It must kill you to think about it, but this country, the USA, the greatest, most powerful, and most influential nation to have ever existed, was built by CHRISTIANS. You have what you have mainly because of CHRISTIANS.
Oh yes, of course there were Jews, and Hindus, and atheists, and muslims.
But, the overwhelming majority of the people who made this, the land of milk and honey, (and untold opportunity) were CHRISTIANS.
That's the truth. The lowdown, the skinny and the final word.
Can't put any spin on THAT.
So let's go ahead and change all that up, huh?
Let's make sure the name of God is erased from public view and hearing. Let's teach something else, maybe like the glories of socialism, or how we should love and respect the pregnant transgendered homecoming queen. Teach the 5 pillars of islam but not the Ten Commandments. Give 10 year old girls birth control without their parents knowledge (and arrange an abortion!) but suspend the valedictorian for bringing aspirin to school.
That's a great plan. No matter what happens, stick to that plan.
It's probably going to work out great and carry America into ever growing greatness.

In that entire meandering rambling post... I guess what you are trying to assert is might makes right? And since America is an majority population of Christians that all of America should just live under that boot?

Last I checked our DEIST forefathers penned a secular republic with religious liberty for all, and that no one group got special rights.

The irony is that you didn't even get the post you responded to... which pointed out that God is NOT out of schools, that people CAN pray in schools, that they CAN bring and read bibles.

You see, Imclain, as you just displayed, Christians have an overactive persecution complex.

America, the secular republic, IS the greatest nation on earth for many reasons... one of which is that it protects religious liberty. You trying to spin the truth to fit your inferiority complex is amazing. You see... religious liberty means YOU get to practice your religion.... it doesn't give you a pass to force feed it to everyone else... or worse, feed it to other peoples children without their consent.

Ah...I KNEW the elitist intellectual in you would jump at a chance to reiterate all the reasons God shouldn't be in our public discourse.
All I need to do is have you compare the intelligence, knowledge, and accomplishments of the generations of kids raised in CHRISTIAN environments with the toilet licking, Tide pod swallowing, tatted up and stupid-as-rocks group of today's proud culture warriors.
MAYBE a little God wouldn't hurt.

Finally, if you haven't noticed (being so busy with the elitist lecturing to the inferior masses), the LAST thing I have is an inferiority complex.

Please point to where it was said that God shouldn't be in our public discourse, AND please explain specifically what you mean by that, what would that look like?

I postulate that even you are not sure, I speculate you repeat the meme because it confirms your persecution complex.

Kids, have done stupid kid stuff, for generations. Be it mailbox baseball, M80's down toilets,playing the hyper-ventalation game... kids doing dumb kid stuff is not new, it's been around forever.

Arguably there was, as you say it, more "God" then compare to now... and yet kids still did stupid kid stuff.

So, I'm not sure your argument holds up.