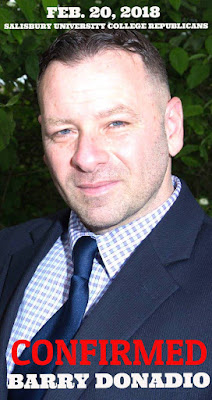 Mr. Donadio said; “ I am proud that the Salisbury University College Republicans has invited me to speak to their membership. I am delighted that they asked me to speak on one of my favorite subjects, the second amendment.”

Donadio has an impeccable background. He led an honorable career in the Volunteer Ambulance Service, Volunteer Fire Department, the Military, Law Enforcement, and the United States Secret Service. He was assigned to the White House during the Bush and Obama Administrations. He also served in multiple Middle Eastern war zones during his career. In 2013, he authored the book “ TWA Flight 800 First Responder Witness Account”. This is an account describing his actions during the rescue of TWA Flight 800 on July 17th 1996. In 2014, he was elected to the Queen Anne’s County Republican Central Committee in Maryland. He currently serves as President of Public Security LLC, which is a reputable and trusted private security and investigation firm licensed in Maryland and New York.

He is also a Maryland State Police certified pistol instructor that offered free training for the entire MDGOP. In January 2017, he was appointed the Sergeant At Arms of the Maryland Republican Party for a two year term. Donadio has publicly taken strong stances on the second amendment. He has also supported and endorsed pro second amendment Republican Politicians and candidates for office in recent years.

Oh this is funny, I just saw this on Facebook so I checked it out:

Dona Donadio is a pro-life conservative Republican. She supports keeping taxes low, and promoting Republican values.
Dona has been a resident of Queen Anne’s County for over 13 years and enjoys appearing in theatrical plays, videography and still photos.

She has worked on projects for Mothers Against Drunk Driving (MADD) in the county.

Barry Donadio stated that his daughter is a true Republican. “She has my endorsement and she has my vote.” he said.

Dona looks forward to participating in voter registration drives and volunteering to fundraise at Republican events during her term of office.
+++

Then I just went to his daughters page and found this:

This is his daughter who he claims "is a true Republican."

A pro-Life "true Republican" doesn't post a picture of her and her friends with a picture created on June 29, 2015 🌈Created with facebook.com/celebratepride just like Jim Ireton did???

She is a true Liberal and has Liberal friends. Anyone who proudly created a celebrate pride picture the same day that our Left Wing Nut Supreme Court illegally said that all Homos can legally marry.

Go there and check it out yourself.

Barry, you've got some explaining to do!

He has wiggle room in my book. His background is impressive and not easy. He is proud of his daughter. No harm done.

It's okay, 10:07, Barry's audience here will be a room full of like minded Democrats as well. That's why no real local Republican wants to join that club. Everyone in it is a Democrat registered as "R:.