Princeton Economist: Nearly Half Of Working Age Men Not In The Labor Force Take Opioids Daily 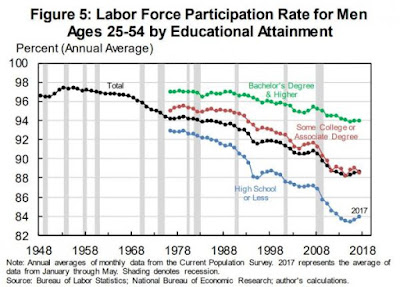 Esteemed Princeton professor and former Obama White House economist Alan Krueger is back with yet another prediction about why Americans, particularly men between the ages of 25-54, suddenly no longer have any interest in working. In his report, entitled "Where Have All The Workers Gone? An Inquiry Into The Decline Of The U.S. Labor Force Participation Rate," Krueger ponders the data below which reveal that the labor force participation rate among men, aged 25-54, started dropping around 1965 and has been steadily declining ever since.

Yeah right, we're all on drugs! LOL! Hey, Obama, when 2008 happened, everybody was putting stepladders on their Geo's or whatever they had and all their tools and worked every day for cash to feed our families because there were no over the table jobs! If you think for one minute that that economy is still existing today, you're an idiot and so is whoever wrote this stupid article! His assumption that we all turned to opioids is a pretty far reach, as I've witnessed plenty of us still going to Home Depot to purchase our "opioids" to install in somebody's house so we can feed our kids and keep the house!

Trump is doing a fantastic job at bringing jobs back to American shores and fixing all the huge damage done by the Democrats the past 25 years, and I have full confidence in his ability to MAGA unless one of your idiots decides to do an unthinkable act.

He's bringing full time, well paying taxable jobs back and making life affordable by killing double priced Obamacare and countless other improvements. Give the man room to do his job. There will be plenty of room to complain in 2019 when he's running for his next term.

I'm calling BS on that article.
Sounds like another democrat trying to find a reason why obama and all of his goof friends DIDN'T drive the country into the dirt.
Nope.
It was DRUGS!
obama was using too many of them, it looks like.
obama created all these shovel ready jobs and companies wanted to hire millions, but obama could not get Americans off drugs. It wasn't HIS fault.

They still don't get it.
They don't see anything wrong with their "message". It's racist bigoted deplorable Americans on drugs and carrying Bibles that messed their savior's plan for greatness all up.
Trump will CONTINUE to whip that ace. The sky is NOT green, no matter how many times you tell us it is....
Sissies all over the country, Keep Cheering.