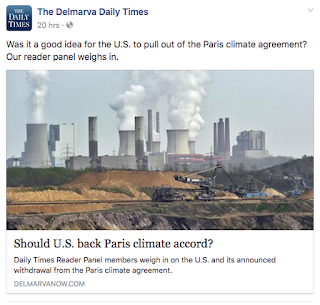 Yes, we all expected liberal media to go postal over the Paris Agreement (which most hadn't read, even now) but this has gone beyond or demonstrates just how stupid they think you are as a viewer/reader.

It is no secret by now, the country is hypersensitive to fake news. We look for it in every story we hear or read and question it's validity. Smart voters saw through the subterfuge  of the last election and realized there's more fake than real going on in our country right now. While on the other hand, some believe the fake and question the real. It's a real mess that at some point, will need to be sorted out.

Unnamed sources are not uncommon in the news industry; in fact, it's a staple for which we can get good intel. However, when the media is purposefully skewing the information to fit some grand agenda, it becomes another thing entirely. It is lying to the public and one would think you, the consumer of news, would be fed up with this nonsense - especially from your local media whose supposed to be a part of the community they serve.

This little opinion weigh-in on the Trump Administration withdrawal from the Paris Agreement by the Daily Times (posted June 4, 2017 at 5:02am) looks innocent enough that at first blush, you wouldn't even think two things about it. However, there's just one problem with their picture. It's a nuclear power plant with smoke belching into the sky.

It's pollution. Right? Well, it's actually water vapor, a norm for nuclear power plants - not toxic poison, which is exactly what the editor intended for you to infer and would love you to believe! Read the image's pull-out caption to see the complete disinformation as if the image wasn't a bad enough lie alone!

Like deceptive advertising, this gives all the indications of the ruse even our local four-page paper is perpetrating on America. It's a disgusting and insulting attempt to use imagery to hoodwink you. Indicating there's something there when there is not. Allowing you to draw inferences that are frankly untrue altogether.

One would think, given their dismal circulation, continual downsizing by corporate and difficulty keeping up with new and social media, the Daily Times crowd would be hyper-vigilant in their efforts to deliver what sparse news they do have to the community. Instead they would rather make things up out of the clear blue or skew through images to what they want you to believe. Dirty air/water and throwing granny off the roof is the biggest rage - especially for President Trump!

At this point, one really has to as the question: Why does Gannett keep funding this cash cow farce that doesn't have any credibility to print news readers in Salisbury? If they were to fold tomorrow, would we care? Really, to quote Hillary Clinton, "What difference does it make?"

What do you expect from the Daily Times. They only print what Gannett tells them to, those idiots don't have brains of their own. They're just replicants doing what the man tells them to do instead of doing the right thing. They sold their souls a long time ago. Why would anyone care about this failing paper anyway. They should just cut the cord and let them go.

I would think the Daily Times would make some attempt to clean up their act. Why don't these editors learn? Do we even know who the editor over there is anymore? I lost count when Sahler left.

I miss Mel Toadvine. Where is he now? Last I heard he was in FL but his family still lives around here.

Some underling was probably told to go find a picture from the AP log or stock and they just pulled the first pic available. Not thinking but just as bad as lying. smh

Yeah, I think he's in Florida. Moved down there after he retired. Doesn't everyone in this area? They all get out as fast as they can.

Does the DT have any staff here? I thought their editors were in Wilmington.

The news media is propaganda.
It is owned and managed by those who want to rule over us: Cabalists, Freemasons, Globalists, Bankers, so on

Propaganda doesn't just have to do with globalists and freemasons, the Democrat party has a lot to do with this whole deal, too. You can't just throw all the dark horses out there and think it's just a simple answer. There's many things going on, intertwined.

I'll keep saying this till someone gets it. Reporters can no longer write an article with any substance so they have to use clickbait to get people to read their pathetic article. Usually, the article will have nothing to do with the headline. The sheep will then copy and paste the article headline and comment on it. They will comment strictly on the headline and fake news has now been created. Who cares about facts. This picture speaks volumes. If you tell people it is harmless water vapors, everyone knows if you use water to cool something down it creates steam, the sheep will still think it is toxic.

The picture could be about anything it doesn't matter as long as it proves their point. No need to have facts. Those are just inconveniences getting in the way.

Pollution spewing plants I've seen in person have grey or black smoke not white. Ever been on the NJ turnpike around Newark. Black smoke and fire. People are so gullible.

I stopped reading the daily gag many many years ago, they are sad and pathetic.

2:20
You are right, but I also see the point of view from 2:18 as well.
I think you are both saying the same thing. So am I here.
The Democrat Party is financed and controlled by the same elites who run the banks and corporations. They are super wealthy and have a lot of power. The politicians are working for them and they control the levers of power from behind the scenes. They use Masonry as a secret way to communicate to the politicians throughout many countries. The media people are also Masons and so they get their marching orders too a the Lodge. Thats why they all say the same thing. They work for the same masters. Very ugly situation and most people have no idea how powerful these people are. The politicians are mere puppets.

Just toss out another article claiming the vapor trails left by airliners are nothing but water vapor and watch all the Chemtrail idiots come out of the woodwork. It's hilarious, but sad, just the same...

The desendants of the evil currently a cancer in our country today. I.e deception, lies, greed, Abortion, Homosexuality, hostility to God, failing churches, false gods.Numbers 33:55. But if ye will not drive out the inhabitants of the land from before you; then it shall come to pass, that those which ye let remain of them shall be pricks in your eyes, and thorns in your sides, and shall vex you in the land wherein ye dwell.

I can recall The Daily Times had done an article about how the Salisbury Industrial Park was thriving with businesses - and I can vividly recall my telephoning Greg Bassett (former editor of The Daily Times & current CEO of the Independent) right after Dresser/Haliburton announced they were closing.

I repudiated his article and offered to provide him a local factory closing list - listing many of the factory closings including displaced workers, dates, personnel managers - names & phone numbers. I never will forget his answer to my query as to why his paper never provided coverage or doing a Feature article showing as to what had actually happened to our County's manufacturing base.

Greg Bassett's Quote: 'I've seen your stats and they are old - and so is the news'.

Well now - fast forward to modern day - and let's examine the reality as to what has happened not only locally - but to most of our nation - virtually all of our manufacturing has VANISHED! And yet this strikes at the very heart as to why Donald Trump won the election.

Beezer, the Dimms don't like it when you call them on their false BS. They get so upset they accuse you of doing it. I've found in my many years of dealing with liberals and their madness, they always accuse others of what they themselves, do in practice. It's their allegiance to Alinksy's rules. They are so school in it they do it like second nature. Ingrained. Disgustingly false. Patently wrong. You should send Joe your list. He'd print it or better yet, write on it. Your stats are not lost here.

As for Greg, look at the Independent. Another DNC Newsletter with nothing but local fluff and nonsense articles which prove his relevancy is long over. If he was really that good at being newsman of the Shore, why isn't he still at the Daily Times? Most pompous ass I ever met and with absolutely no reason to be. He was horrible at his job. Mel was the last good editor of the Daily Times and when did he leave? Mid-Nineties. Greg was better when he was Mel's lackey but as a chief, he's no leader.

The Daily Mistake is over. Why don't they just call it a day? The only time people buy the paper is on Sale Flyer days. Most times, you can read it for free at the McDonalds so you can see who died. Obituaries and Sales. They don't offer the community anything more. I sometimes see their ads for employment but stop because why bother. You'll just get laid off in short order because the staff is constantly shrinking.