You Can't Say Worcester County Residents Don't Give A Sh!&, Or Can You? 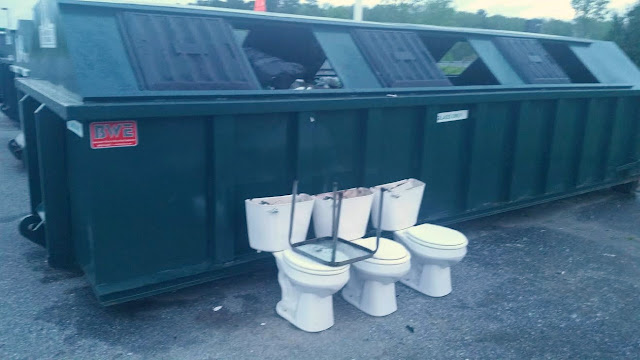 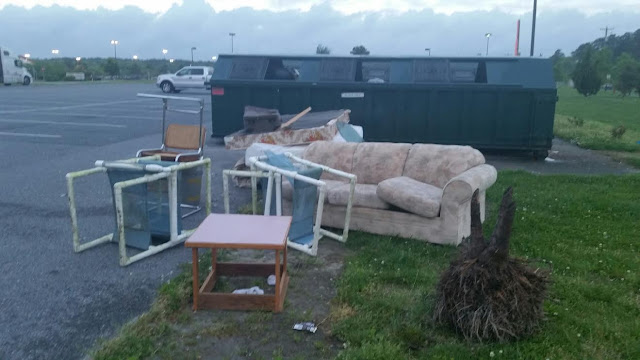 I took this picture around 5:00 this morning in Berlin. Look, these are not transfer stations, they are recycling centers. Where does it say COUCHES & TOILETS?

I can tell you that in Wicomico County they are planning on putting cameras and lighting at their locations and anyone breaking the law by illegally dumping will be fined. Hopefully Worcester County follows suit.
at 5/07/2017 06:00:00 AM

The same kind of dump was made at night at the Salvation Army, a dozen or so old couches and stuffed chairs that nobody would want that cost the SA driver and helper a day's work, fuel and dumping fees at the landfill.
It looked like it was the work of a cheapo landlord who knew that no one would want the stuff but wasn't willing to pay for dumping it.

This recycle center in located in front of Berlin Wal-Mart and usually has junk like this every week. The facility is not fenced off and when the winds blow...trash and papers are blown across RT 50 and onto other properties. Maybe the facility should have limited hours, be fenced off and closed after dark? Maybe someone should let Worcester County Commissioners know about the problems? Maybe they will do something or not?

The original poster wants MORE government intervention in our lives? SMH. It's people like you that are the biggest problem in this country. You're always trying to find more ways to get government into our lives, instead of reducing government's role in our lives, as it should be.

Wait a minute. Don't we pay the Government taxes to provide us services? Let the Government dispose of these items for us and earn the money we give them.

10:49. No you are incorrect. We don't want more government involved in people's lives. If a recycle center is offered we want the local government to do the recycle center with the same common sense, restrictions and rules as any public business entity would be required to do. Can't just operate a recycle center with no fence or hours that allows some inconsiderate slobs to drop their toilets, mattresses and junk off and take advance of the service offered.

That is what tipping fees are for citizen. That way those who utilize the service pay for the service.

I'm wondering why this continues...not because of laziness or STUPIDITY - is there not a better outlet (aside from the main landfill before Snow Hill or the small facility in Berlin) for one to rid themselves of unwanted furniture or toilets?

In OC proper, they have a spring/fall get rid of your junk Saturday where DPW comes down the street with dump trucks and BIG CAT dirt movers where furniture gets scooped into the dump trucks then hauled out..

Nothing cool about this.

That all looks like homeowner property. Homeowners pay for a permit to use transfer stations for their homeowner trash, yet the transfer station won't accept these items. Hence dumping them at alternate locations like this, or on the side of rural county roads. $100.00 for a permit, and they want you to go to the landfill and pay a "tipping" fee that is based on tonnage. The unfairness is not lost on people that do this. They are normal everyday items that a homeowner needs to dispose of.

I have a neighbor who still has his old sofa sitting out in his yard. He was too cheap to have someone haul it away or have someone haul it and have him pay the fee. The sofa has been sitting in his yard for over four years now. No one wants to touch it. Afraid it now has snakes, or rodents or other critters living in it. It's now a conversation piece for the people living in my neighborhood. Sofa was dark green, but has faded to a pretty lime green!

At my other home in FL, we have bulk pickup curbside one day each month. Trash is picked up 2x per week and recyclables 1x per week.

so really, how much would it cost to take a toilet or couch to the dump?

problem is no consistent rules.
homeowner-transfer stations have large signs home trash only
but they have a dumpster labeled metsl
you go one day and you can dump something metal
go the next day and they say go to Newark--the main landfill/dump

all the commissioners want to do is raise taxes again!!
so much wasteful spending with wanting raises and vehicles
did you see last weeks agenda--going to pay almost $100K a year for fiber internet access

THE FOLLOWING ITEMS ARE NOT COVERED BY PERMIT
Non-covered items will not be accepted at Convenience Centers and must be disposed of at the Brick Kiln Road Facility by crossing the scales.
 Renovation and construction material including, but not limited to: shingles, siding, wall to wall (unbound) carpet, windows, doors, drywall, wood, treated lumber, etc. The rate for disposal of renovation and construction material is $60.00 per ton with a $10.00 minimum charge. The rate for disposal of Asbestos material is $165.00 per ton.
 Any item containing refrigerant (or any cooling agent) will be charged a $20.00 environmental fee. (These items include, but are not limited to, refrigerators, freezers, air conditioners and dehumidifiers).  Car and pick-up truck tires only (limit 10 per vehicle, per trip) will be accepted at a cost of $2.00 off the rim, or $5.00 on the rim. Any tire disposed of on the landfill will be at a charge of $20.00 each.

If you have a permit and the refuse you bring to the landfill is covered by the permit, you don't pay tipping fees.

It's 2.00 dollars off the rim unloaded at the tire pile. If you dump it among your trash on the dump it is 20.00 dollars because landfill employees have to remove them by hand. State law doesn't allow any tires in the landfill.