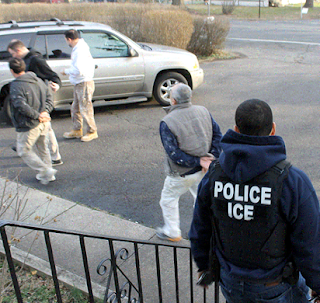 PHILADELPHIA — A total of 248 foreign nationals were arrested over the last two weeks in the states of Pennsylvania, West Virginia, and Delaware during a targeted enforcement operation conducted by U.S. Immigration and Customs Enforcement (ICE) aimed at criminal aliens, immigration fugitives, re-entrants and other immigration violators.
“ICE officers make extraordinary efforts to keep our communities safe, and this operation is just a small example of what they do every day. ERO officers took oaths to protect the homeland and to arrest individuals in violation of immigration laws,” said ERO Philadelphia Acting Field Office Director Jennifer Ritchey. “This operation resulted in multiple arrests of individuals with violent criminal arrests or convictions in the three-state region.”
“In the Philadelphia area, ICE arrested several at large criminal aliens in which the agency had issued detainers but the City of Philadelphia failed to honor them and released the individuals from custody — a situation that puts the public at unnecessary risk. ICE will continue to conduct targeted enforcement operations, whether local jurisdictions intend to cooperate with ICE or not.”


“These regional operations may result in arrests of individuals other than those initially targeted. Many of these individuals were criminals, who had illegally re-entered the United States, which is a crime under federal law. One of the most egregious individuals encountered during this operation that had not initially been targeted had been deported from the United States on two prior occasions and had a conviction for sexual abuse of a minor,” said Ritchey.

Drop in the bucket

Sweet, finally able to do their job, Thank you President Trump!

So, did they catch and then release the .01% just to give them trial dates, or will they actually do their jobs and drop them off in Guadalajara? Will they go after the other 99.99% of the rest of them?


Laws need modified. If deported and rearrested jail them. Deportation should carry automatic conviction, and suspended sentence that will be served without parole or probation if rearrested.

There must be meaningful disincentives.

Hit Amick Foods in Harbeson Del off Route 5....The Human Resource Head there gets money from MS13 and other spanish organizations for hiring illegals....they also pay for his vacations..... go dig there>>>it all can be proven...