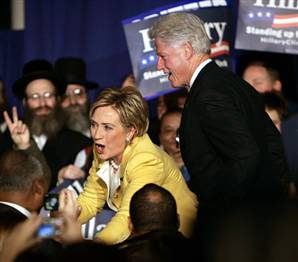 Bill Clinton is an evil man, and his wife is no better. One event stands out in my mind when I think of the Clinton's: Waco. Remember April 19, 1993? That is the day that evil cowards of the American Secret Police murdered innocent children and adults in the most infamous act of State terrorism against American Citizens: the Waco Holocaust. As an exercise of State power, the FBI, the BATF, and other thugs with badges incinerated dozens of human beings, people who had committed no crime and asked only to be left alone to practice their own beliefs, which the great document, the Bill of Rights, guarantees.

According to former White House aide Linda Tripp, Hillary Clinton pressured Vince Foster to resolve the 1993 Waco stand-off in a move that led to the deaths of the 86 men, women and children. Tripp said that Foster, at Mrs. Clinton's direction, transmitted the order to move on the Branch Davidian's Waco compound, which culminated in a military-style tear gas attack on the wooden structure. The compound burst into flames hours later as federal troops used a U.S. Army tank to ram the building and insert flammable gas. Tripp said she was with the former deputy White House counsel when the news of the Waco assault broke on television. "A special bulletin came on showing the atrocity at Waco, and the children. His whole body slumped, and his face turned white. He was absolutely crushed knowing the part he had played. And especially that he had played the part at Mrs. Clinton's direction," said Tripp. Tripp was stunned by the contrast between Foster's heartfelt emotion at the Waco tragedy and what she observed from Mrs. Clinton. "Her reaction, on the other hand, was heartless," Tripp recalled. Foster was found shot to death in a Virginia park three months later. Tripp's charge is corroborated by the 1999 documentary on the deadly confrontation, "Waco: A New Revelation." They bribed, extorted, threatened, killed, and God knows what else to achieve their ends. Two politicians that Machiavelli envisioned. And now these unbelievably depraved individuals want to return to power.

SO HERE, PRESENTED TO YOU, IS A LIST OF PEOPLE, WHO FOR A VARIETY OF REASONS, THE CLINTON'S MAY HAVE FELT A NEED TO SILENCE IN A RATHER PERMANENT WAY. DEATHS ARE LISTED BY DATE:

Susan Coleman: Rumors were circulating in Arkansas of an affair with Bill Clinton. She was found dead with a gunshot wound to the head at 7 1/2 months pregnant. Death was an apparent suicide.

Larry Guerrin: Was killed in February 1987 while investigating the INSLAW case.

And to think, these people will probably be reelected to the White House. It is imperative that our young people are informed of the type of people the Clinton's are and not to listen to the BS that flows from her mouth while on stage or in front of a camera.

I remember all of this very well. I was eating lunch with my roommate in college at (SU) when the Branch Davidian raid came on the news and the entire world got to watch all of those people burn to death.

I remember hearing about the trail of bodies left in the Clinton's wake throughout their political careers and of course the Jenifer Flowers, Juanita Broderick, et al stories when they were new.

Don't trust the Clintons! They are mad mojo on the American people.

Aaaaand they want to run the country for four/eight more years?! Not if my vote is the deciding factor!

The only vote I would give to her (them) is to convict and send her (them) to prison - to rot right next to Sharpton, Jackson, Mosby, and their messiah OweBlama!

Let's focus here, not about murders or emails, but about secret computer servers/equipment in her bedroom closet in Chappaqua New York, (mind you, a home that was purchased to deceive and corrupt rules about eligibility for office) hidden away from government eyes but used to conduct "official" United States Government business. Most TOP secret, even communications with top Obama aides and who knows who else. It was easily breached and foreign governments were monitoring communications on the private unsecured server in real time.
One could consider this an attempt to evade, one could consider the covert nature an attempt to hide communication.
If I did it, they would consider it espionage. At the very least criminal negligence, but mostly EFFING STUPID!
Certainly not presidential. Then again, neither are cigar tubes...

Now you know why Susan McDougall chose jail over crossing the Clinton's on the witness stand. She saw her husband's demise as a clear warning.

if we don't get these thugs out of power now, we are all to blame for what will surely follow.

ammo up and prepare.

These are all coincidences. Everybody knows somebody who has died. It might even be themselves.

There are no coincidences.

Both should be Hanged for Murder said...

The Clintons should be in prison and also the Obamas. Joan Rivers was murdered after she said on television that Obama was the first gay President and that Michelle was a transgender.