WBOC Continues To Prove They Have No Journalistic Integrity 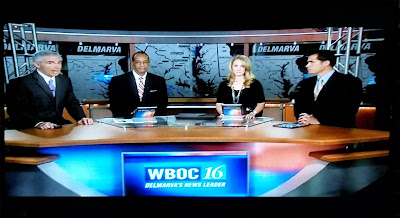 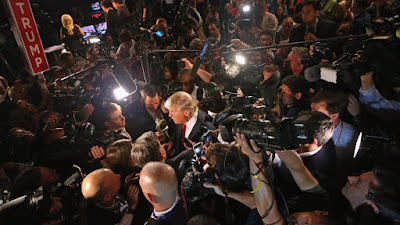 WBOC once again went on the attack against Donald Trump for his decision to not participate in the upcoming Fox News Debate.

The people that were interviewed ADMITTED they wouldn't be voting for Trump anyway and they never once allowed a Trump supporter to BALANCE the story.

This is what makes me sick to my stomach with this local Liberal news station. The MAJORITY of Republican Americans support Donald Trump. So what are they trying to do, create a cult of Liberals because THEY are afraid Donald Trump makes more sense then any other Presidential candidate?

We will NOT be converted and WBOC will continue to fail. Won't it be amazing how one guy will ultimately bring them to their knees just like I did with the Daily Times.

By the way WBOC, don't think everyone isn't noticing how local businesses are no longer advertising with you. Now we get to see infomercials of dining room table pads just like grandma used to have. You're going down and you better believe I'm going to pound my chest along the way.
at 1/31/2016 06:00:00 AM

So, let me get this straight. YOU and you alone brought down the daily times. HMMM...It is my recollection that all print newspapers are succumbing to the internet, NOT blogs as you insinuate. Look Albero, I hate you with all of my being but I do agree with you that the liberal media is certainly trying to manipulate Trumps agenda. So, I do agree with this post other than you having to brag on yourself again, as usual. I will be voting for Trump, however the world we live in today will not let it happen. The USA will never be what is was meant to be ever again. SAD

Why are you only calling out WBOC on this bs? FOX is saying the same thing! So have they gone liberal? Several of FOX's newscasters (including FOX AND Friends, Brian and Steve) have said what a mistake Trump is making. Many of FOX's shows today have shown pieces from by gone days of when Kelly and Trump were buddy buddy. followed by remarks criticizing Trump's actions over the debate

Turn on any channel and hear the same crap over and over saying this will end Trump. I'm tired hearing about it. I am a Trump supporter and no MSM will change my mind, If you choose to view WBOC to see their news, fine, it's your choice. But to get on here and vilify WBOC for reporting exactly what CBS. NBC, ABC, CNN, FOX. are reporting on Trump/Kelly seems strange.

I do not know why a person can be so hateful they get on here wishing businessesshut down and employees lose their jobs. Good grief if WBOC puts you in such a twitter - change channels. I got so sick hearing about the debate I switched to HGTV.

I don't watch local news anymore just a bunch of liberal twits that want a job with CNN.

Democrats running scared. I am loving every minute of it. Stay strong. Trump in 2016

We love you Joe. Keep informing us on news that liberal media won't report. It's in colleges. Schools. News outlets. When will the madness stop. Hopefully when TRUMP is President.

5:35, I obviously need to remind you that when I started SBYNews the Daily Times had 200+ employees. Now they are down to a couple dozen.

You cannot sit here and say that SBYNews didn't have a major influence over their downsizing. We started delivering news and information they refused to publish. While we continued to grow, they continued to shrink.

Do tell me WHY we grew larger then they had EVER been? They are on line too!

The same can now be said about WBOC. When we do create our own news channel on line, you watch what happens.

I'll also remind you, WBOC, WMDT & the DT's ALL had their own Blogs, they all failed.

So when I say we are a strong part of their shrinkage, I know what I'm talking about.

Since you hate me with all your being, don't you find it interesting how you hate me so much, yet you come here for your news. Do you ever wonder how we can actually achieve millions upon millions of hits each year WHY? It's because we tell the truth. It's because we deliver you facts. It's because we're willing to stand up to the so called giants and challenge them.

HMMMM, does this remind you of someone. Oh yeah, DONALD TRUMP! I've been doing this for 12 years now. Trump has been running for President for a short period of time but we are very similar in so many ways.

I'll finish with this. The Main Stream Media is forcing you to comment with a registered Facebook name. We remain anonymous. Americans are in fear of retaliation, ALL OF THEM. We all watched former Mayor Tilghman walk into a Council Meeting and walk up to a new person attending the meeting and saying, WHO ARE YOU, WHAT'S YOUR NAME, WHERE DO YOU LIVE. Ireton would BULLY any woman who challenged or questioned him. That won't happen here.

So when I predict ALL of your local media will be gone soon enough, I KNOW WHAT I'M TALKING ABOUT. It isn't a threat, it's REALITY. Hate me all you want, you need me and I thank you for admitting such.

Now, let me say this to all of you as well. ARE YOU READY... The broadcast I am talking about happened tonight at 5:00 PM. Do YOU know what channel it was on? FOX! Your LIBERAL media even controls the local FOX NEWS channel and they should lost it immediately. Now do you understand why I'm so pissed?

6:04, Do tell me how many of the people, (and even companies) you mention have run for President?

Let me say this. Do you have ANY CLUE how many people told me I'd never make it with Salisbury News! Even my close friends openly admit they were completely wrong.

So to people YOU and the people you mention have NO IDEA what you are talking about.

Donald Trump is running his own race, just as I am running my own Blog. Guess who is #1 in BOTH categories?????

Tear them a new one, Joe.
Keep up the stone cold, bottom line, final word and the skinny TRUTH.
The liberals and girlie boys CAN'T STAND IT.
I'm cheering that like college kid at a Sanders rally!

Fox has certainly obsessed on Trump today without a doubt. Proving my point from yesterday. They are very upset that he has dared to challenge their establishment and his audacity has actually won him more kudos than naught. Should be interesting to see how this all plays out in a view a skewed by bias journalists and mainline conservatives who think he's a flash in the pan.

They will try to stop Trump nicely at first. When that dont work, he better watch out. The rainbow agenda will move forward. Over Donald if thats what it takes.

Discovery HD Goldrush/Moonshiners "trumps" everything WBOC. Downward spiral started when they ditched livestreaming on their webpage...all to save $$$$$$. So hows that doin for ya?

Trump will get more out of this move than all of the other candidates and Fox combined!

Trump is all Fox news is talking about right now!

Get out of the sticks. You guys really need to get off the shore more often. There is a bigger, brighter world out there. Go embrace it. WBOC is far from being the best news station and it's in the last tier of the very end of the Nielsen rating system. What does that tell ya?

The Daily Times may be owned by Gannett but it's far from being on their priority radar. They couldn't care less about the Delmarva paper. It's just an investment for them. Any competition against the DT is welcomed by Gannett because they know it's inferior and irrelevant. That's why the DT is pimping for advertising on Facebook.

The zealotry surrounding Trump reminds me of that around Obama in 2007. So many easily swayed non thinking minds not grounded in the Constitution.

WBOC must have taken this down, I don't see it anywhere on their site.

I try not to watch the locals here in protest against them robbing satellite customers of their out of area networks.We like NY teams and having affiliate stations in NYC made it easy to catch games all year round.

Two Things Could Be True said...

You're expecting impartial reporting? From WBOC? I'm surprised they covered it at all. Seems they're more interested in Delaware news than anything else.

I may not always agree with you but you truly post info that other media outlets won't touch and its always funny to watch the TV and print news deliver a story on that you blogged about a day or two before their scoop.The other local blog is too inconsistent,and no longer allows comments on any stories so they are losing readers right and left.

If I am subjected to another idiotic Kia ad on WBOC my head will explode.