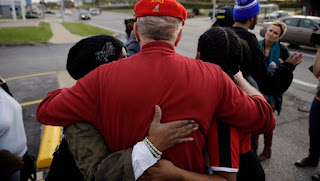 "I thought I was going to jail," she said.

Instead, Lewis, 24, and Kimoni Griffin, 23, received several $100 bills from a secret Santa who chose Ferguson for the Wednesday afternoon holiday cash giveaway to help the community recover after the August 2014 fatal shooting of Brown, who was black, by former Ferguson police officer Darren Wilson, who is white.

The anonymous benefactor, a Kansas City businessman, asked to not be publicly identified to focus attention on the importance of charity rather than his own background.

This post is disturbing.Not because of the secret Santa,because that can only be a good thing,but because of the current circumstances in Ferguson.How are these people surviving after driving businesses away & causing hundreds of families to move elsewhere? They must have provisions coming in from somewhere because they no self sustaining skills.All they know is how to tear stuff up & lack any comprehension of how to build it back.

Bring there Parent a job application.

The hell with Ferguson. Start following directions from police officers and there wouldn't be a problem. Where are the 5 RAMS PLAYERS who walked out on the field with their hands up???? Nowhere to be found. Where is Obama, holder,the democratic governor who Said the cop was guilty.

They're treating these people like they were some sort of victims of a horrific racial injustice, when most were the PERPETRATORS!

The real victim was the officer who was put through pure hell, lost his job, career, and has to live in fear the rest of his life from the savages.

B.S. I guess none of you have experienced police intentionally raising the tension in police stops just to try to get more charges. Putting a flashlight an inch away from someone's face and if they touch it when they try to sheild their eyes they are charged with assaulting an officer. I've seen this twice, once it was my wife, both times no one was breaking the law.
I guess all the Constitution talk on this website goes out the window when it is young black males in bad communities that they live in through no fault of their own, being subjected to stop and frisk unconstitutional searches on their way to school every day.
How about all the "pro-lifers" who cry for the unborn but crack jokes when it is a young black man losing his life to a police bullet.
Did you know that the police force of Fergeson was so rampantly praying on the blacks in the community that fines were one of the cities main sources of income? Yet you on this site cry about even having to pay taxes. I wonder if those fines had as much of an impact on the local economy as the CVS burning down.
This isn't a new problem. The criminal justice system has used the black man as its whipping boy since the end of slavery. The dogs and fire hoses turned on peaceful marches of the 60s, the discrepancies in the law between coke and crack in the 70s and 80s. The BET marketing gimmics that you point to as a supporting fact for your racist ideology. BET is owned by a white guy! This isn't a new problem and it is NOT a media invention. Your failure to recognize this is why the Tea Party and republican party will both soon be gone. Your "idealism" seems to only apply to people who look like you. There could have been a wave of conservatism and small government politics that swept the country if you had not made it clear that it only applies to your little click.
We are all slaves to this system, you all are the worst kind. The house negro. The one who does whatever is nessasary, even against your own morals to be "successful" in this corrupt system designed specially to divide and conquer the little guys within it. You will admit how evil this government is but say that murder is justified for someone not following its rules.

It reminds me of an old Irish saying, if we can't turn your minds we will turn your ankles, so we can know you by your limping.