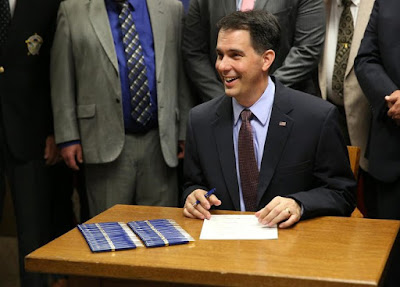 Gov. Scott Walker is making it official that he is running for president — sort of.

On a day that he greeted President Barack Obama in La Crosse and GOP lawmakers finally made progress on the state's stalled budget, Wisconsin's Republican governor filed papers with the Federal Election Commission "after hearing from countless Americans" during his testing the waters stage, an aide said.

With or without a formal announcement, Walker now essentially meets the definition of a candidate under the FEC, which states in part that an individual becomes a candidate for federal office if they have received contributions totaling more than $5,000.

Along with his letter to the FEC, the governor filed a "statement of organization" for a committee named Scott Walker Inc., which listed its address as a P.O. box in Middleton. Kate Lind, who has previously served as treasurer for Walker's gubernatorial campaign, is listed as the treasurer in the FEC filing.

Walker is set to make his formal announcement in Waukesha on July 13, a date first reported by Daniel Bice of the Milwaukee Journal Sentinel.

Just an FYI about Mr. Walker, folks.
He and his GOP controlled Wisconsin legislature have included language in the state's budget, of all places, that "..blocks the public from reviewing nearly all records created by lawmakers, state and local officials or their aides, including electronic communications and the drafting files of legislation." Furthermore, no one seems to know who added the language and aren't answering questions, but the budget committee voted it through anyway.
Does all of this sound familiar to anyone?
What it tells me is that Scott Walker would be the kind of President that's not all that different then the one we have right now. A President that wants to hide the workings of his administration from the people it is supposed to represent and proceed with his own agenda. I think it's referred to as a "transparent administration".