Breaking News: Mayor of Baltimore says its OK for Al Sharpton to come there! 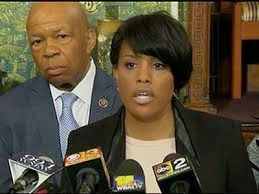 In a press conference this evening, Mayor Rawlings-Blake, responding to a question having nothing to do with Sharpton, suggested he would be welcome on the scene, which is rapidly degenerating into chaos and violence. Is she nuts?

She also declared a curfew -- but not until tomorrow night. Go figure.

There's now a huge fire in progress in "Charm City"!

Fire is at Gay and Monument Streets -- not far from Johns Hopkins Hospital.

Oh boy.. elijah cummings you friggin piece of garbage! you should be ashamed of what you've created!! Sharpton? that's the last thing this black flag op needs. Figures with libtards leading it will be mess anyway. Wake up!! we are under attack from lefties, marxist and progressives...we are being destroyed from within.

There's your answer! She WANTS the riots! INVITING SHARPTON! Crying for riots tonight, but not tomorrow when he shows up?????????


Does anyone here see this????

I hope the national Guard can buffalo this witch into submission and take control, as she is just another agitator.

She's all FOR this rioting!

She is no better than those rioting. She is a racist and the biggest problem Baltimore has.

She let the situation get out of hand.

She is a completely incompetent product of affirmative action!

GOOD it will keep the dope fiend off the EASTERN SHORE!!!!!

I imagine curfew wasn't implemented tonight because PD is undermanned.

This is what happens when you put idiots in charge.

At 10 PM -- even more looting and another fire in Baltimore!

MLK is rolling in his grave.

Seems to me that she wants the city to burn. Previously she said, "We want to give the ones who want to destroy some room to do that," or a statement very close to that.
Now she is declaring a curfew for tomorrow. I guess tonight is a free pass for those who want to destroy.

Curfew was not put on tonight because the gangs promised her a 72 inch flat screen TV, and loads of new clothes from the mall.

The Police are not undermanned. They are allowing the citizens to burn themselves out. The N/G will be there soon to help control things. If I were a Baltimore cop I would call out sick for a month or two. All cops across America should for about a month.

This is what you would have nightly without the police. How is that working for ya libtards.

Imclain you in Baltimore burning shit with the rest of the liberals. Yep the cops are so bad lol Welcome to the real world. I am ready are you ?

These same thugs burning everything are the same thugs the police deal with daily. What you see tonight is a direct reflection of what happens when police set back and let evil prevail.

As for thanks O'Malley comment you must be Black or a Dem. Really he set the fires you dumb azz. No thanks to Black thugs. This has set race relations back 50 years. Thank God lol zNow lets get it on !!!!!!!!!!!!!!!!!

Abe Lincoln was going to free all slaves he had a plan to ship them to Liberia. Wow what a country we could have been.

Time to honor their complaint about their ancestors being brought here against their will as slaves, time to send them back to Africa. They hate it here, look at how they treat their cities, neighborhoods, and want to be called, "African-Americans", yup, free passage back to your country! I would gladly give money to this!!

fine by me. less people would be murdered by kops. don't just call out sick, quit. you think the people of balt or any city would let this continue indefinitely?

how would you know what any cop deals with on a daily basis? been watching tv again.

this is what happens when kops murder people every day and get rewarded for it with paid vacations and no punishment.

shame you weren't around so abe could send you somewhere.

FYI - the mayor of Baltimore and its police chief are both black, along with most if not all of the city council and state's attorney's office. What's that tell you?

This post should be at the top of the blog this morning!

Bring Sharpton in - to make it worse.

If these wastes of oxygen want to act like animals - the remaining citizens should be allowed to treat them like animals...

Hunt them, turn the meat in for Soylent Green processing - I think Bil-Jac pays by the pound for rendering like Perdue provides.....

what do you expect from the city whose inmates run the prison?

Burn everything so they can get money from FEDs for all new stuff.

Obviously, she's in just way over her head!

4:57 you are a loser of world class proportions. You lost your job for being a drunk and a loser. Wake today at 4:57 a.m. to have another drink what happened sober up a little.

Libtard the cops hate you wayyyyy more then you hate them trust me.

Now why don't you go buy a nipple for that bottle of whine loser.

I had to T shirt made in OC Saturday. "Don't run and stay alive ". Hahaha