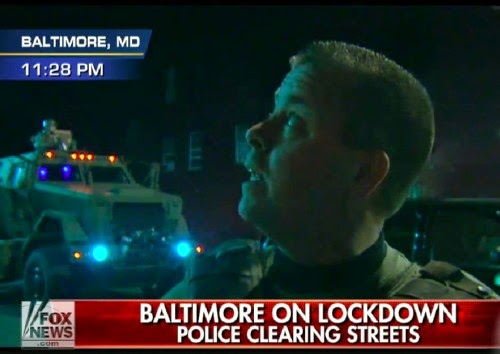 People giving the middle finger to law enforcement during the unrest in Baltimore isn’t necessarily an unusual sight — but from people inside a church?

He said he saw a group of black and white individuals standing behind the glass doors of Simmons Memorial Baptist Church, and “five or six” of them gave him the middle finger just before 11 p.m., well after the city-wide curfew had been imposed.

The sheriff said that one of the white individuals grabbed her crotch and mouthed the words “eat my ‘P’ effing pig” and that another one — who wore the medic band around each arm — raised both of her hands and gave him a double middle finger.

Lewis told TheBlaze that after he pulled out his cellphone to photograph what he was witnessing, most of the people in the doorway turned and “fled,” but three remained, one holding up a black T-shirt over her face. Behind them read a sign, “Welcome to Simmons where you can ‘Experience the Difference.’”

The most dangerous position you can be in is between Mike Lewis and a camera.

Amazing, that no matter where Lewis is, he manages to get himself on TV or being interviewed. His people should have gone to Baltimore to help, but he should have stayed behind, in the County.

Few people remember that O'Malley arrested tons (700,000?) of blacks while mayor of Baltimore. Now he's running for President and walking the streets of Baltimore? Also, with a 40% unemployment rate for Blacks in Baltimore, their current mayor wanted to become home for 25,000 illegal immigrants?

Like what you read about Hillary, it's how you enrich yourself at the citizen's expense and hope nobody remembers.

The citizens of Baltimore have had "no future" Democrats running that city for too many decades. It's about time them woke up and began to ignore the slobbering of the entrenched politicians.

Thanks to our fine public education and university system at work! Breeds nothing but, communist, Marxist fascist ideologues ingrates. Who don't have a clue how the real world works.

It's a completely different world in the Baltimore ghettos. People living down here are clueless. He should be thankful the finger is all he got.

He kept saying county instead of city. Lol

Who is paying for his and the entourage's meals and hotel rooms while he is there? Let's see the receipts! Bet they are not staying the motel 6.
Another fed up taxpayer.

Why did we vote him in again to not be in town 9 months of the year! I know I won't vote for him again!!!

Exactly 7:06 who is footing the bill for this waste of time? Screw that sewer called baltimore ..cant wait to get the hell outta this state

How unclassy!!!!! Why on National News he would repeat such vulgar language!!! It is very irresponsible. He is supposed to be "defusing" the situation not escalating it in front of a camera.... Hope the riots don't come to Wicomico County after his 5 minutes of fame. Why in the world would he repeat what these people said to him!! Makes no sense!!!!

Everyone at the NAACP "safe streets" meeting in Salisbury last night was VERY disappinted AGAIN that Lewis was a no-show at the meeting. He really does NOT care about Wicomico county. Only about how he can get on TV. Here's my middle finger for him. !

Oh yeah, the state pays...they have their own money. Ummm hold on a second, they have our tax dollars too.

He is likely to get the same salute upon returning to home base which is where he should have stayed.

Let them squander....this was done by the Democrats to take heat off of Hillary

Is it coincidence that out of 3000 plus cops Mike Lewis just happened to be the one interviewed by all the news agencies, I think not. One local news agency reported that Sheriff Lewis was tasked with securing the Baltimore Police Headquarters. From What?? What they were actually doing was standing at the entrance gate opening and closing it as vehicles came and went, oooohh that's dangerous !! I felt much safer after his comment that there would not be a repeat of the previous night as long as him and his people were there. Like the 3000 other officers played no part in that, really !!!! Lewis also commented that the governor had asked for 10 armored vehicles. If he had actually been where everything was happening and not safe downtown,miles away from the violence he would have seen that there were many more than 10 already there and facing the real danger. In case nobody caught it neither Lewis no his people were wearing a helmet of any sorts, which should tell you what, they were never in a volatile or dangerous location. Its one thing to go to Baltimore for the right reason, but to go and seek out every opportunity for an interview and photo op is sad. Lewis should stay in Wicomico County and fulfill the promises he has made to the crime victims and people living there. I guess to do that though he would have to be there occasionally.

He wasted taxpayer money by driving that fuel hog to bmore for the purpose of getting his 5 min of fame, agitating people in a church and stooping to their level of taking cell phone pics of them thus agitating them more and then comes back home to give another interview and bash the way things were handled by Baltimore, from what he saw in his whole hour of duty when he wasn't on camera. Typical little man syndrome.

All you dumbass people knocking him....did any of you go up to help? I didnt think so. Whats wrong with an interview? Haters are gonna hate.
Good job Mike and those that went with him.

My white dumbass isn't going anywhere near Baltimore until MD allows me to carry concealed. Our tax dollars are paying for Mike play solider and get on TV as much as possible to further his personal speaking career. He was elected to serve as Wico's sheriff not protector of Baltimore or a paid speaker around the country.

Surprised and disappointed to see all the haters on here. There is absolutely NO way to please some people. I'm very proud of Mike Lewis and thankful to have him as our Sheriff. He has every right to voice his shock at such arrogance from people he is there trying to help. If any of you delusional haters think you could do a better job then go to Baltimore and do it, and stop complaining about people who have a lot more courage and ambition than you do.

Actually I was there, didnt seek out interview after interview, and if the only thing i could reference was getting the finger and smelling tires burning I think I'd keep it to myself. If I didnt know better I wouldve thought Lewis was the Police Commissioner !

maybe some residents don't want outside cops there?

I guess some people believe in a God with a commandment that says Thou shalt not kill
How bout u mike lewis?

Mike Lewis shows up in Baltimore. Fans aren't allowed to watch the orioles America's Past pastime

The interviews in question were pre arranged when Sean learned that Mike would be in Baltimore.He had 24 hours to prepare and did a great job.

That's because they slept in a command tent on the asphalt or cots, damn right they weren't in a motel six! Fed up tax payer, psshhh I bet you're on govt assistance. Tell you what, let's sent some looters to your house and see what's up then tax payer

I have no doubt he does, as he has been a role model for standing up for law and order. Someone has to, because there are a whole lot of people out there, many of which are thankfully in prison where they belong, who never got the memo. Nor the one about "thou shalt not steal".

I agree with 2:09 I support Mike Lewis and the whole Sheriff's office, he just said what he observed. The Simmons Memorial Baptist Church should be ashamed of them selves and should feel appreciative to the law enforcement there. It could have been just as easy for them to have burned the churches down. If members of a church can do this it is no wonder Baltimore is what it is.

Anonymous Anonymous said...
That's because they slept in a command tent on the asphalt or cots, damn right they weren't in a motel six! Fed up tax payer, psshhh I bet you're on govt assistance. Tell you what, let's sent some looters to your house and see what's up then tax payer

roid rage? pain pill addiction? just what is your reason for such hostility and disrespect for the public in general?

So now Mike Lewis was patrolling Baltimore. One report I read said he was sitting down around the police department building to make sure it was safe. Now he's all over Baltimore trying to tell them what to do. Wow he's super cop.