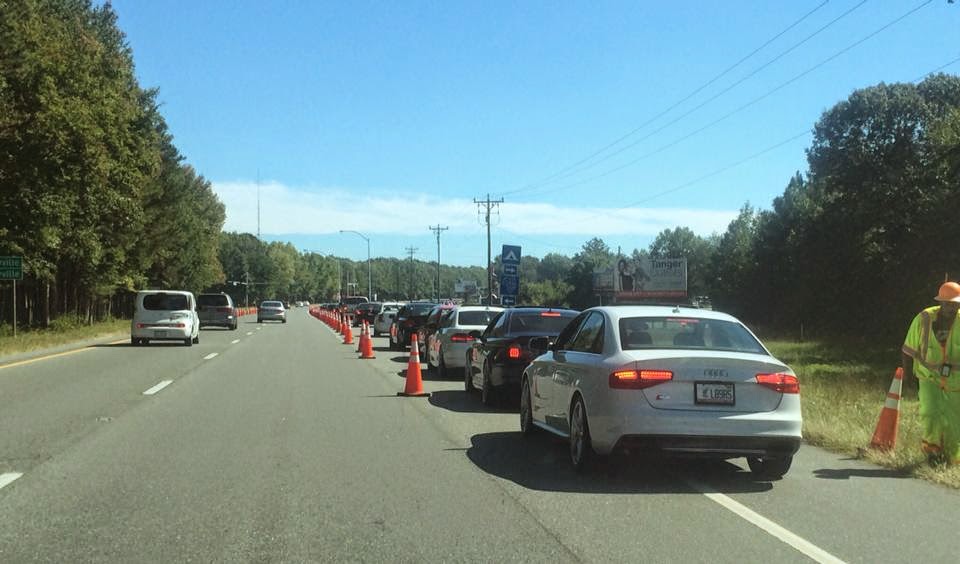 Busy and loud weekend in the area with the VW/Audi rally headquartered at Fort Whaley Campground off Route 50. Here is the scene today as participants enter the event. While the event is not sanctioned by the Town of Ocean City and no official events are held in Ocean City, the resort area has been flooded with these vehicles since mid-week.

They need to go home and not come back. Created trouble in Ocean City yesterday and just now in Linwood a couple are trying go back the steam of traffic by riding side by side on Rt 50.

Huge traffic mess in O.C. Hope it was worth it.

It will be a mess when they leave.... thousands of them at the campground!

This event put together by social media, no radio,tv,poster advertisements from anyone.Shows how powerful it is.

Suck it up...businesses can always use the $$$ and most are very good people.

The place was packed. We rode by about 5pm and there were cars all over the place and parked on the grass all the way up to route 50

Liked seeing all the different VWs of every age and color. Was a bit messy getting around it at the campground...but it kept moving.

Had a VW pass me and the muffler sounded like a chain saw trying to have sex with a bee.

Came down for a nice off season quiet weekend - so much for that! We were kept up up all night both Friday and Saturday with loud exhaust, racing engines and squealing tires. Ocean City please do not sanction events like this in the future.

Anonymous said...
They need to go home and not come back. Created trouble in Ocean City yesterday and just now in Linwood a couple are trying go back the steam of traffic by riding side by side on Rt 50.

HUH? What the heck?

Ocean city and the close surrounding areas are for one thing.....TOURISTS......when will you ignorant morons realize its all you have. There are no real jobs on the shore...no industry..not much of anything....these folks come down for a weekend and spend money....most are great people...just like any group that picks the area. You all better learn to embrace the tourist because should perdue pull out there will be nothing left.......grow up people.....

Muscle cars have their show also... which I actually think OC endorses. I drive into OC 3 times this weekend... didnt have a problem ... and it was great how they made them merge from Willards to get into carshow.

10:40 that's in two weeks. OC has multiple "car" related weekends however this one is not. But at the end of the day all those people bring money to the OC area. Who really cares what they drive? if their passion is for euro cars.. cool I personally like all the car weeks in oc and support anyone who works on and modifies their vehicles.

Oh the horror of people gathering to have fun and spend money. How dare it appear that they are inconveniencing me when they aren't really. It ruined my whole day when that loud car passed me.... and the funniest one... they kept me up all night.

I was in OC Saturday and there were no issues at all.

The comment section is just a small sampling of what is wrong with this area.

The eastern shore mentality.....eventually the cause of its undoing.....

Yep, amazing to hear the local Shorebillies always complaining about the tourists who support the entire local economy and whose taxes pay their SSI. Boo hoo traffic was bad for a couple hours on a Saturday. Not like you were going anywhere important anyway, suck it up.

You know, I don't really mind the snarky comments about the Shore - some of them may even be accurate. I just wish you twerps would identify the wonderful places that you come from. You really need to offer a basis for comparison. More than likely some shithole in Jersey.

9:50...before you call a place a ****hole maybe go and actually see for yourself......I was born and raised in new jersey but havent lived there for many years. I lived on the shore for over ten years...constantly reminded I was just a come here...mind you a come here who bought a home and spent my money here. If you would liketo compare the shore with anyplace forget about it. The shore has no jobs, no progress, and no respect for the people who keep its economy running...the TOURIST. I have now lived in three shore towns in my life, Ocean City, Forked River New Jersey, and now Naples Florida. The Eastern Shore of Maryland is the only only area of the three not thriving......so ask your self.....whats a ****hole?.....New Jersey doesnt have to advertise on billboards in different states to generate tourism.......maryland does.....the shore has become just a place to drive through.....and thats what most people do anymore.......